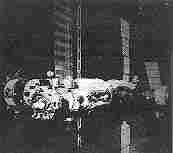 AN EXTRA inch or kilogram is proving to be a real bottleneck for those us astronauts wanting to hitch a ride aboard Soyuz, the Russian spacecraft. They are either too short, too tall, too fat or too thin, much to the us-based NASA's (National Aeronautics and Space Administration) discomfort.

Three years of joint space co-operation with the Russians has discloset: their rather strict regulations wil regard to gaining an entry aboard tht spacecraft which ferries astronauts 9 Mir, the Russian space station. Russia:- specifications require an astronaut to t between five feet four and a half inchO and six foot tall with a seated height 4 no more than 37 inches. Chest measurt ments, have to correspond to beuid within 44 inches and no less th.N 38 inches and the weight in strictly adhere to less than 87 kg.

All these restrictions me that there are veinauts who meet these requir ments. So when the planned intl national space station takes sh.p Soyuz which will carry the crew It and down for the first few year will have hardly an) -0 aboard. NASA, however, hopes that the Russians will agree to modfy the cramped Soyuz capsule to fit the Americans.