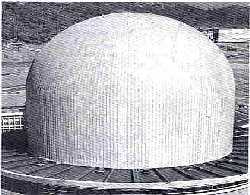 The administrators of India's nuclear establishments have always maintained that safety standards in their plants are stringent and strictly observed and do not require evaluations by external agencies. Participants at a symposium on Advances in Structural Dynamics, organised in December by the department of civil engineering, were thus pleasantly surprised when Atomic Energy Regulatory Board (AERB) chairperson A Gopalakrishnan took a different stand.

Gopalakrishnan said he favoured the setting up of research centres outside the atomic energy establishment "to provide answers to questions of safety and related problems raised by the AERB from time to time." He denied this was prompted by reports that nuclear establishments in the country faced increasingly insurmountable safety problems. According to him, where public safety was concerned, secrecy on the grounds of security and sensitivity of nuclear research, took less priority and "the AERB had an obligation to ensure correct information to the people".

The AERB chairperson felt the country's academic institutions had been kept out of atomic energy research for far too long. "The time has now come for researchers within the atomic establishment to interact with the academic world," he said. According to Gopalakrishnan, areas such as quake-resistant engineering, storage of radioactive equipment and prevention of exposure to radioactivity from nuclear medical equipment, provided scope for such interaction.