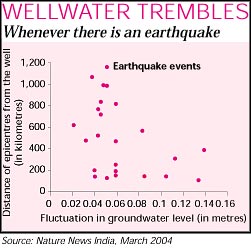 geologists have found that there are sudden and pronounced changes in the water level of wells in the Thar Desert before an earthquake. The observation raises the possibility of using wells to predict the seismic activity.

The geologists, D Muralidharan, Rolland Andrade and U Satyanarayana of the Hyderabad-based National Geophysical Research Institute, studied a 165-metre-deep well located in the Churu district of Rajasthan. During a four-month period (December 2001 to March 2002), changes in the water level were observed on 24 occasions shortly (about 24 hours) before the India Meteorological Department recorded the tremors.

The water level changed by 0.05-0.15 metres before earthquake events that had epicentres between 100-800 kilometres away from the well. Whether the water level rose or fell depended on the character of the earthquake -- if it was compressed (Earth plates colliding), the water level increased; when it was dilated (plates moving away from each other), the level decreased. Of the 24 events, sudden drop in water levels of up to two metres was observed on 13 occasions. The changes were said to be inversely proportional to the distance of the well from the epicentre of an earthquake, and directly proportional to its magnitude.

The "pronounced changes" are unlike those observed elsewhere in the world during the quakes. Muralidharan speculates this may be due to the groundwater not being disturbed by human activities or the desert's hydrogeological conditions. As per the team, the changes may have escaped detection for 20 per cent of the earthquakes during the study, as measurements were taken once every hour.