Two incidents of illegal handling of waste oil have come to light recently, underscoring the fact that trade in the hazardous product continues unabated in India 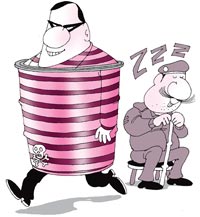 two incidents of illegal handling of waste oil have come to light recently, underscoring the fact that trade in the hazardous product continues unabated in India. That this is being done in utter disregard of Supreme Court (sc) directives -- and despite India being a signatory to the Basel Convention on Control of Transboundary Movement of Hazardous Wastes -- makes the act even more reprehensible.

Taking exception to these two cases, sc advocate Sanjay Parikh issued a notice to K C Misra, secretary, Union ministry of environment and forests (moef), on February 15, 2003. The legal document states: "In spite of all the court proceedings and orders, violation is continuing ... I intend to move the sc for contempt."

In the first instance of illegal handling, the Inland Container Depot (icd), Tughlakabad, Delhi, allegedly released 51 containers of waste oil to two companies in the second week of February. Sixteen containers were released to Faridabad-based Pal Chemicals Ltd and 35 to Ludhiana-based Om Udyog Ltd. The other case pertains to Jawahar Customs, Nhava Sheva, Jawaharlal Nehru Port Trust (jnpt), Mumbai. Jawahar Customs published an auction notice for 273.16 metric tonnes of waste oil in the Mumbai edition of a national daily on February 13, 2003. The auction is scheduled to take place within the jnpt premises.

As per Parikh's notice, the moef secretary is required to provide details of action taken to regulate trade in waste oil, before the sc takes any "legal action". Strangely, the moef is unaware of the notice and claims that it will take action only after receiving its copy. In the process, the ministry has already missed the February 18, 2003, reply deadline.

"The moef has not taken any action on illegal hazardous waste imports. In fact a high-powered committee on management of hazardous wastes, set up by the moef in 1997, was wound up last month," says Parikh.

When Down To Earth (dte) contacted Misra's office, it was informed that joint secretary V Rajagopalan would reply to the notice. Rajagopalan's office further directed dte to moef director N H Hosabetu, who in turn said that he was yet to receive a copy of the notice. Quite evidently, the authorities are passing the buck.

"We have already told the port/customs authorities not to release waste, which is in violation of the sc's 1997 order. But if such activities continue then the sc should take action. The moef can't do much," says Hosabetu. The apex court had ordered on May 5, 1997, that "no authorisation or permission (for hazardous waste) would be given to any authority ... which has already been banned by the Union government or by any order made by any court or any other authority...(In addition to this) no import would be made or permitted ... under the Basel Convention." The sc further ordered on December 10, 1999, that the Union government had to act on the panel's recommendations on waste lying in the ports, with the cpcb overseeing the matter. But authorities continue to violate rules and the sc orders with impunity (see: "Slipping through", October 15, 2002).

Meanwhile, icd Tughlakabad initially denied having released 51 containers. C K Jain, appraiser, customs department at icd, said that no such waste oil had been released. On further enquiry however K U Thankachan, joint general manager (commercial), accepted that the depot had released six containers of low sulphur waxy residue. This, according to him, is permitted by the sc. But a hazardous waste expert differs: "Even the six containers of low sulphur waxy residue cannot be released as it violates the court orders." S P Punjabi, deputy commissioner, jnpt, who brought out the auction notice, was not available for comment.

With underhand dealings in hazardous waste oil showing a rapid rise in the country, the situation calls for a fresh round of judicial activism.