Only 25 days of work provided per family as against the guaranteed 100 days of work; wages paid late in 55 per cent cases 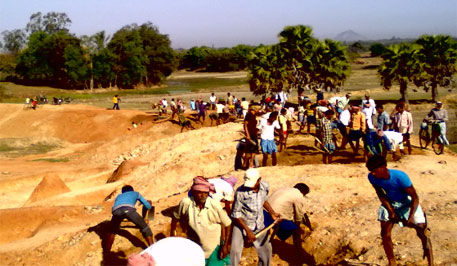 District administrations in rural West Bengal are resorting to innovative ways in their hurry to spend funds allocated under the Mahatma Gandhi National Rural Employment Guarantee scheme (MNREGS). In the Maoist-affected West Midnapore district, petty contractors are doing the earth work earmarked for MNREGS with excavators; the payments are released after preparing false muster rolls.

"At least 60 per cent of the work is going on like this," laments Sandip Singha a local activist from Paschim Banga Khet Majoor Samiti. As a consequence of prolonged political violence, the panchayat members have run away and local politicos and administration is running the show, alleges Singha.

"In several cases false utilisation certificates were prepared when no work was done," continues Singha. "Even when work is allotted payments are made after three to six months—the delay is making the villagers averse to the programme and they are forced to migrate to cities."

Anuradha Talwar, activist and advisor to Supreme Court commissioners on right to food, says the state and Central governments are weakening the scheme after reaping political dividends from it. "Industry bodies like FICCI, big farmers and even the World Bank sees the scheme as a dampener to the supply of cheap labour. MNREGS played an important role in wage bargaining and pushed up real wages in rural areas."

In various ways, the government is trying to make people averse to the scheme, says Talwar. Firstly, real wages were fixed at Rs 100—now the nominal wages stand at Rs 136 for West Bengal—well below the minimum wage norms set by the 15th Labour Commission and subsequent Supreme Court judgements, according to which MNREGS wages should be above Rs 300.

Secondly, payments by the "task rate" has made implementation of MNREGS anti-worker, feels Talwar. Under the scheme in West Bengal, workers are paid Rs 136 for earthwork of 62 cft; when workers work below the 62 cft limit they get less, but when they work over the limit they are not paid more than Rs 136. This limits the earning capacity of workers.

MNREGS figures show another disturbing trend of late payments. While the Act stipulates payment of wages within 15 days of completion of work, in reality wages were paid at best two months after completion of work, say activists. In 2012-13, the state government paid 55 per cent of wages late. In 2011-12, the late payments were as high as 60 per cent. "The state government is yet to formulate a system to pay unemployment allowance or compensation for late payment of wages which the Act provides for," says Talwar.

To make matters worse, villagers are made to suffer if they protest. For instance, in backward Purulia district's Hura block, 10 workers were put in jail in 2012 when they protested against non-payment of wages of 342 workers from 2009.

Women, not used to heavy earth work, have also faced severe problems. According to Suchitra Mandal from Bankura district, women are often alloted work 7-8 km away from their home. What makes it more difficult is absence of toilets and creches for children at the work sites. MNREGS has provisions for these on paper. The result: in West Bengal only 33 per cent workers were women as against 93 per cent in Kerala.
Web Specials Web Specials Web Specials West Bengal Wage payments Supreme Court … Sandip Singha Paschim Banga Khet … Mahatma Gandhi … Down to earth Anuradha Talwar
SUPPORT US