State government yet to revoke ban on non-motorised transport despite repeated protests, calls from civil society and advisory from Union Ministry of Urban Development 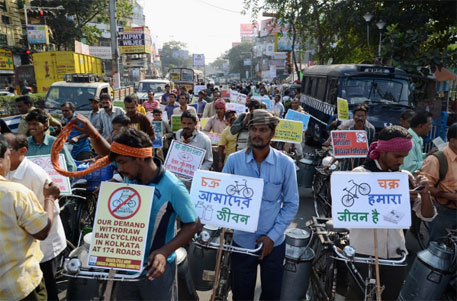 “I have been fined three times this month while delivering milk,” says an angry Omkar Mandal. For over two decades now, Mandal has been cycling about 10 km every day to pick up and deliver milk. “Each time I have to pay Rs 120. How can I survive like this?” he asks.

Mandal along with other citizens of Kolkata—newspaper delivery boys, medicine suppliers and petty traders for whom cycling is a means of survival—took to the streets of Kolkata today to protest against the ban on cycling in the city. This the fourth such street-protest in as many months. Later, the organisers, Kolkata Cycle Arohi Adhikar O Jibika Raksha Committee (KCAAJRC) met the state transport minister, Madan Mitra.

“I fully support cycles and non-motorised transport and care for their safety and promote their use. The government has not ratified the notification issued by Kolkata police and hence no ban exists,” the transport minister told the organisers of the protest march. Dukhshyam Mandal from KCAAJRC  informed the minister that “the police continues to harass cyclists who use the cycle to commute for their daily livelihood. He gave Mitra a piece of stamped paper from Kolkata Police, proof of a cyclist fined today at the Park Street police station. “The minister took the receipt and asked his office to take action against such acts of the police,” said Mandal.

On 29 May this year, the Kolkata police commissioner restricted cycle, hand carts and all other forms of non-motorised transport (NMT) from 174 major thoroughfares. Five years back, on August 11, 2008 the traffic police had restricted cycling on 38 roads. “Cycling prohibited” signs now adorn most city roads where one is allowed to pedal only during odd hours—between 11 pm and 7 am.

Kolkata police in its fervour to implement the ban has been collecting fines from errant riders who dare to defy. Cyclists are regularly made to pay upwards of Rs 100 without any receipts. The monetary penalty is illegal as the police commissioner’s order has no provisions for fines. 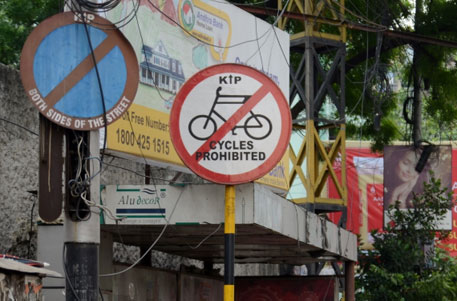 The ban on cycles makes little sense as it remains the vehicle of choice. Kolkata is the only metro in India where trips by cycles (11 per cent) and walking (19 per cent) outnumbers trips made by cars (8 per cent). Only 1.5 per cent of road accidents happen due to cyclists’ fault compared to 71 per cent because of drivers of motor vehicles. Cycles are hugely popular in a city that has the least amount of road space and low ownership of private cars. The Kolkata traffic police’s contention that cycles slow down vehicular traffic also doesn’t hold ground: the average speed of traffic in Kolkata varies between 14 km to 18 km per hour.

In July this year, Down To Earth was the first to report on the ban and the plight of cyclists in Kolkata. After the report was published, several NGO’s took to the streets to protest the ban. The national and international press, including the BBC, Washington Post and The Guardian wrote extensively on the regressive order.

The widespread coverage in the press annoyed the ruling government. Derek O’Brien, MP from Trinamool Congress, the ruling party in West Bengal, wrote a blog on October 9, titled “Stop pedalling fiction about Kolkata”.

“I’ve been bemused by the outrage in certain national newspapers, many of them not even published in Kolkata, that have editorialised and expressed anger at the so-called cycling ban in Kolkata,” wrote  O’Brien who is a famed quizmaster. “For some years now, in keeping with the norm in major cities of the world, Kolkata has had cycling restrictions on heavy-traffic roads. This prevents accidents and saves lives, including those of cyclists who otherwise have to negotiate tight traffic that allows neither them nor bigger vehicles much room for manoeuvre.”

A scathing response came from Switch On, a civil society group working to lift the ban. “When you say the ban is in keeping with the norm in major cities of the world, I would really like to know which cities you are talking about. All cities across the globe are moving towards cycles and non-motorised transport. London, a city Kolkata aspires to become, has had a cycle boom since the turn of the 21st Century.” 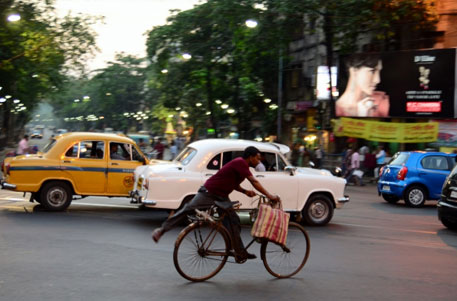 “Kolkata is the most polluted metropolitan city in the country and is around 2.5 times more dangerous than the capital city of Delhi,” wrote Ekta Kothari Jaju from Switch On.

“Automobiles account for nearly 50 per cent of the air pollution load. This ban will further put Kolkata's citizens health in danger, when the city is already (in)famous for being the lung cancer capital of the country. As for solutions, the comprehensive mobility plan published by Kolkata Metropolitan Development Authority (KMDA) advocated the need for cycle and NMT infrastructure in the multi-modal transport mix for Kolkata. In the ‘car centric’ policy, the report projects a very dangerous traffic scenario for Kolkata,” wrote Jaju.

On October 18, Sudhir Krishna, secretary with Union Ministry of Urban Development (MoUD) wrote a strongly worded letter to the chief secretary of West Bengal. “The decision reeks of insensitivity towards the common citizen... there could be multiple arguments in favour of the ban, but the lack of awareness about a sustainable transport system and disregard towards the needs of users and their rights reflects a callous approach to dealing with the problems of urban transport,” wrote Krishna. “I would request you to look into the matter personally and direct Kolkata Traffic Police to lift the ban on cycles immediately and undertake a proper study to resolve the traffic problems in a more equitable and sustainable manner.”

Alapan Bandopadhyay, transport secretary of West Bengal, says his department has nothing to do with cycles. “You should talk to the Kolkata police,” he had told Down To Earth a few days ago.

When contacted, deputy commissioner of police in charge of traffic, Dilip Kumar Adak, pedalled the same arguments he had given in May this year. “There is very little road space in Kolkata and allowing slow moving vehicles on the road will lead to more accidents. After the restriction was imposed Kolkata’s traffic movement and speed has improved.”

“We are considering different opinions on cycle restrictions and will see if the decision could be modified in any way,” he says. It’s been more than five years Kolkata’s cyclists have lived with the ban by paying hefty fines and riding sheepishly like criminals. If the transport minister keeps his word their worries might soon be over.

Share the road: investment in walking and cycling road infrastructure