Wetlands can cope with sea rise

Vegetation and rate of sedimentation are crucial to wetlands’ resilience 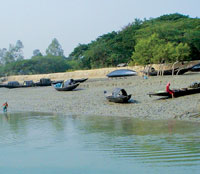 AMID predictions by climate scientists that half the coastal marshes may not survive rising sea level, comes a glimmer of hope. A study published in Geophysical Research Letters in December says vegetated wetlands with high tidal ranges—remaining flooded for longer periods—and sediment concentration may survive sea level rise.

The researchers treated wetlands as dynamic ecosystems, instead of following the standard practice of treating them as a static landscape, in which case wetlands will go under water faster. They used five numerical models designed to explore the relation between tidal inundation and sediment deposits, and interaction between physical and biological processes in marshlands to observe their responses to sea level rise.

Coastal wetlands with wider tidal range and high sediment availability will be resilient enough to overcome con servative predictions of sea level rise (5 mm a year) by the Intergovernmental Panel on Climate Change, the study said. Marshes with low tidal ranges and sediment concentrations may not survive.

Lead researcher, Matthew Kirwan of Department of Environmental Science at the University of Virginia in the US explained the observations. He said the elevation of a marsh usually increases over time since new layers of sediment are deposited each year. With high tidal ranges and more sediment concentrations elevations can rise faster, helping the marshes survive sea level rise.

Vegetation growth plays a vital role by helping trap sediment, leading to accretion of organic matter and reduced erosion. But if the actual sea level rise exceeds the conservative estimates, even the most resilient marshlands might not survive.

The study can be used to predict with more certainty the chances of survival of a dynamic ecosystem.

Using simulation, the researchers could study two regions of the Mississippi and the Atchafalaya river delta in USA. They concluded the marshes would survive at sediment concentrations of 70 mg/l measured in the Old Oyster Bayou region, but submerge at 20 mg/l measured in Bayou Chitique region. The study also observed that the Yangtze river delta in China which receives sediments of 1,000 mg/l has survived and is expanding seaward despite 50 mm annual sea level rise.

The study can be extended to other ecosystems. “Every day we discover more examples of ecosystems where plants modify their physical environment. Savannas, deltas, floodplains and sand dunes are all examples of environments where you can’t study their response to climate change without considering how both the physical and biological components will be affected,” said Kirwan.

On conserving wetlands, Kirwan said, social consequences and economic priorities complicate decisions. The main conclusion of the study is that the amount of sediment in water is important. “But dams and levees reduce sediments near the coast and that adversely affects wetlands,” he said.

Antonio Mascarenhas, a scientist with the National Institute of Oceanography (NIO) at Goa, said the “resilience (of wetlands) will help only if those systems are left in their natural state. Wherever interventions happen, impacts are bound to be drastic,” he said. “In India, efforts to conserve wetlands has been given medium priority.

Under the coastal regulation zone (CRZ) rules, coastal ecosystems like mangroves and corals should be given due protection under CRZ,” said A G Untawale, another scientist with NIO. Ramsar Convention on Wetlands of International Importance puts the number of designated wetlands in the world as 1,906, covering an area of 186 million hectares.

India has 24,403 sites identified as inland and coastal wetlands that cover an area of 7.6 million hectares, according to a 2007 data available with the Union Ministry of Environment and Forests.