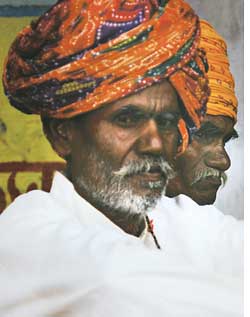 as a part of a centrally-sponsored scheme non-recommended pesticides were being distributed to farmers in Rajasthan. Farmers were being forced to buy unnecessary pesticides as a part of the subsidy package under the National Horticulture Mission (nhm). These chemicals have not been approved for use in the crops that were being cultivated in the area.

Pesticides like endosulfan, monocrotophos and malathion were distributed in areas where crops like coriander and fenugreek were grown. According to the information available on the website of Central Insecticides Board and Registration Committee, the apex pesticide regulatory body, on July 7, 2008, none of these chemcials has been recommended for both the crops.

Six litres of a pesticide along with 40 kg of urea per hectare came with a 75 per cent subsidy under this scheme, which is part of the National Horticulture Mission (nhm). Seeds too were given to the farmer. The farmer was free to buy whatever pesticide he chose from village cooperative stores by paying only 25 per cent of the cost. He was to receive a bill for his payment. The scheme allows for subsidy on inputs to support cultivation over a maximum of four hectares.

nhm was launched in 2005 across the country to double India's horticultural production and take it to 300 million tonnes by 2012. There are several schemes under the programme which are designed to enhance output. Each state horticultural mission introduces government scheme according to the land-and-climate profile of each district. This particular scheme was introduced in 17 of Rajasthan's 32 districts, mostly in the eastern part. The preferred horticultural crop choice of farmers here were spices, herbs and flowers.

Even though the choice of seeds and pesticides was the farmer's under this scheme, rules were disregarded. The end result was an agriculture input subsidy scam in the state. While farmers, who availed of this scheme, chose the seed for crops grown conventionally in his area, he was at a loss when it came to the array of pesticides now presented to him. It thus became easy for vested interests to influence his choice of the chemicals.

This is clearly in violation of procedure stipulated by the government. Specific pesticides can only be distributed to farmers by the government if there is a report of an epidemic or disease outbreak in the crops in that area. Use of pesticides other than those recommended by the agriculture department is illegal. "No permits were issued by the agricultural officer regarding any outbreak," says Ranjeet Singh Gathala, the then state horticulture secretary. It is not clear who recommended the package of pesticides and fertilizer for this scheme. "A farmer will buy anything when made to believe that it will increase production. So when they were giving us all these products at just 25 per cent of the rate, who would have refused," said Bhawarlal Gujjar, sarpanch of Baluheda panchayat of Kota district.


More than 50 farmers in Baluheda bought pesticides, seeds and fertilizers for coriander and fenugreek cultivation at subsidized rates under the scheme in 2006. But these ostensible beneficiaries of the centrally funded scheme suffered heavy losses last year as the seeds were of very poor quality and the pesticides unnecessary.

Premchand Devishankar normally grew more than 18 quintal of the spice, coriander, on his one hectare piece of land in a season.

But last year, with the subsidized seeds and pesticides, he could only get a 5-quintal yield on the same patch. What was worse, the rate he got in the market was half. Overuse of chemicals and poor seed quality had led to poor harvest. This year, when he knew better, Devishankar paid market rates for seeds. He got a good yield in terms of both quality and quantity. He sold his yield at Rs 6,000 a quintal this year, which is double the rate he got last year.

Devishankar also saved on pesticides this year. He used only a single spray of pesticides to control laungiya rog, which is common in the area. A single spray of pesticides is all farmers here need for their horticultural yield. Clearly, there was no need for the mega dose of pesticides that was supplied to them under the subsidized scheme. Even then they could not control laungiya rog last year, sarpanch Bhawarlal Gujjar told Down To Earth . The 20-odd farmers in Baluheda who took subsidy for fenugreek cultivation also had low quality yield and thus reduced rates for the spice, he added.

Jayanti Shankar, another Baluheda farmer, showed Down to Earth tins of endosulfan, triadimefon and malathion that were lying unused. "After a while, we realized that these were of no use. This year, we had a bumper crop without spraying any of these," he said.


Baluheda was not the only place in Rajasthan where reports of irregularities were pouring in from. In March 2007, Gathala received many complaints from farmers all over the state, especially from Chomu and Bilwa areas of Jaipur district. He studied them carefully and found a massive scam was going on in the form of fudged bills, vouchers and also otherwise. Certain cooperative societies were favoured with sums as high as Rs 21 lakh of the Rs 1 crore central allocation per year. Others village cooperatives were ignored. Nurseries supplying saplings were also part of the scam, he found. There were also complaints regarding low quality seeds and pesticides apart from no actual distribution even though the documents with the Horticulture Department showed bills signed by farmers.

Baluheda farmers told Down To Earth they too were not given bills for whatever they bought from the cooperative store. "When the NHM people put up an exhibition here, they said that we will have to pay only Rs 1700 for all inputs plus about Rs 200 as insurance for the crop. The amount went up to Rs 2200 when we actually got the seeds in November-December 2006. They never gave us any bills which we got to know are mandatory when the scandal was exposed. They just made us sign a blank receipt which they took with them," said Madan Mohan, a victim of the scam in Baluheda. All farmers here also say that they never got any insurance money for the crop gone bad. "Who knows what amount they have put on those bills in our name?" asks Madan Mohan.

Secretary Gathala wrote a letter to all district collectors, also chairpersons of district NHM societies, to get a social audit of the scheme done for the two previous years. "I also sent a letter to heads of all co-operative societies in the 17 districts asking them to take disciplinary action or lodge FIRs in cases where forged signature of farmers were used to get funds and the benefits never went to them," said Gathala. Subsequently, in March 2007, he wrote to the chief secretary of Rajasthan referring to a farmers' organization accusing the agricultural minister, Prabhu Lal Saini, of chauth vasuli (extortion). "No disciplinary action has been taken against the concerned official in the minister's constituency where farmers were supplied wrong saplings," the letter stated. Nor has any social audit taken place so far.

In May this year, Gathala came out openly against the state agriculture minister. "On what basis the dealers who supplied pesticide to all 17 districts under NHM were selected and what is their reputation in the agriculture department's records will be revealed if the audit is conducted. The influence of pesticide dealers on corrupt officials will be amply clear with the audit. The minister says that there has been no problem, so why are they so scared of conducting the audit?" asks Gathala.

The fallout of Gathala's actions has been the institution of two simultaneous inquiries one to identify the minister's role in the scam and another to verify if Gathala's coming out in the open was against the conduct rule or not. Gathala was rewarded with two transfers, the final one being to the category of 'awaiting posting order'. Two months later he retired, on June 30 this year.

The inquiry into the scam does not at all touch the irregularities that took place. "Till now, we haven't found a single proof. My job is only to find out about the minister's involvement and we have called for all documents from the department to find out if there is any such thing. However, all irregularities are at a very low level. Certainly, a minister can never be involved in corruption at such low level corruption," said Harishankar Bhavda, vice-president of Economic Policy and Reform Council. Bhavda has been investigating Saini's role in the scam.

The farmers and Gathala know the truth will never emerge till an audit is done. Yet another bureaucrat who tries to correct the system is victimized. The farmers of Baluheda have only one lament "It is the government's money, let it do what it wants with it. Why does it have to play with our lives?" Cynicism runs deep in Baluheda while pesticide companies register profits at its cost.