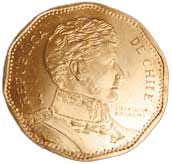 An engraver fired by Chile’s mint for an error that led to the release of 1.5 million coins featuring the name of the country as Chie said his bosses covered up the mistake. The error showed up on Chilean 50-peso pieces in 2009. Engraver Pedro Urzua Lizana said he unknowingly left out the letter l when, in December 2008, he was hurriedly fixing a minor deformity in the original mould for making the dies to stamp out the coin.

The coins were released to the public early last year but no one at the mint, including himself, knew about the error until a coin collector called in October to point it out, he said.

Once informed, mint officials fixed the stamp, but sent another batch of bad coins to the Central Bank without telling officials there of the error, Urzua said. The Bank’s press department refused to comment.