Whether it's addition, subtraction or sports, Indians just can't seem to do well at Olympiads 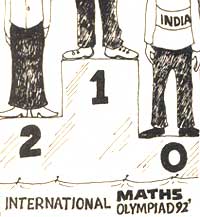 THE QUALITY of mathematics education in the land that produced the mathematical genius Ramanujam has fallen considerably over the years, if India's poor showing at the recent international maths Olympiad (IMO) in Moscow is any indication. But according to some educators, the fault also partially lies in the selection process for the Olympiad.

The Indian team returned without a medal and was ranked 32nd among the 64 countries that participated in the Olympiad, a steep fall from the 10th place they held and the three silvers and one bronze they had won a year earlier.

Commenting on the poor showing, Vijay Verma of the physics department of Delhi University says maths educators have obviously failed to impart a sound understanding of the fundamentals of the subject to students. Indian educators focus on the teaching of established principles, theorems and formulae, enabling problems to be solved by rote, whereas the IMO tests analytical powers, which can come only from a thorough understanding of the fundamentals.

Verma also maintained that the selection process should be re-oriented to test candidates for the same skills they will be tested for at the IMO. The present selection test is based on the syllabus set for qualifying for the Indian national mathematics Olympiad (INMO). Started by the national board of higher mathematics, a division of the department of atomic energy, INMO was aimed at promoting the country's best mathematical talent instead of letting it go into related areas. In effect, Indian representatives for the IMO are chosen from only those who qualify for the national Olympiad. The candidates who pass the INMO test are put through a five-week workshop, which offers intensive preparation for the IMO contest. "This workshop is necessitated by the fact that India's mathematics curriculum does not emphasise certain fundamental disciplines of the subject," says K V Rao, mathematics professor at the National Council for Educational Research and Training.

BC Tyagi, a teacher at Summerfields School in Delhi and organiser of a mathematics competition named Aryabhata Olympiad, asserts that teachers are the weak link in the mathematics teaching chain because they generally lack motivation and their indifference is reflected in the kind of students selected for international competitions.

INMO national coordinator Izhar Hussain, however, denied that India's performance at IMO was symptomatic of the general decline in maths teaching or of a thoughtless selection process. "We have just had a bad day," he commented nonchalantly.