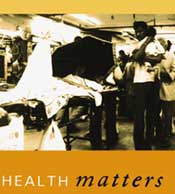 If you love Hindi masala movies, you are very likely to be engrossed by the documentary under review. Every scene leaves one with a feeling of dj vu . Not surprisingly. The documentary is on India's health care sector. Private and public health care systems have been pitted against each other. The film also has a happy ending: a poor man receives Rs 3 lakh worth of free treatment at a public hospital and is cured.

But this patient is among the fortunate few. The country's health care system is in shambles. Not surprisingly, when the government puts in just 0.9 per cent of the country's gdp into health care. This has paved the way for the entry of private players. The director makes it clear that she favours the public sector.

The documentary shows how well-equipped private health care facilities, which use government grants renege on their promise to set aside beds for the poor. A case against such hospitals has been filed in the Bombay High Court. The film goes into such details without taxing the viewer's interest. Instances of malpractices by big private hospitals might have seemed straight out of the popular Hindi film, Munnabhai mbbs , if not for their outrageousness. A family talks about its experience of being coerced into an unnecessary medical procedure -- the hospital also offered a discount. It is easy to see why more than 40 per cent Indians have to sell assets and borrow money to meet their medical expenses.
There are also scenes from public health care facilities where treatment is free but takes time. Corruption and laziness makes the situation worse. Doctors are generally absent from the primary health centres both in rural and urban areas. Medicines and diagnostic tests, which should ideally be available free to the patients, are not there. The doctors make money from sending patients to pathology laboratories from which they receive cuts.

While India's public health system flounders, the government tom-toms a new way to make more money: health tourism. Many in the government and the corporate world believe that India could be the health care destination for the world. But then, how often do celebrities turn to foreign experts during medical exigencies?

The documentary rightly asks: what about the people from our villages and small towns who flock to the cities for treatment because they have no hospitals? Perhaps, they too are health tourists, with a critical difference though: they cannot pay. Surely, it's not ethical to promise others what we cannot give to our own people.

But all private care is not shown in bad light. For example, there is a small time practitioner in east Delhi, who caters to the area's poor. People flock to him because unlike most public health care facilities his clinic does not close down in the evenings. Health matters also lauds other private initiatives, particularly amenities run by ngos. The ngo search runs one such clinic in Maharashtra. The government-aided mitanin programme in Chhattisgarh also earns encomiums from the director. Maybe it's in initiatives like this that hopes for health care in rural India lie.
Overall, however, the film gives a bad report to the private sector. People are forced to take recourse to this sector because the public sector has no space for them. It is time now to renew belief in the public health system and demand that it be strengthened.
Health Matters is an intelligent documentary that puts its message across clearly: it is time for the government to provide health care to the people. The director can be contacted at shikhaj@vsnl.com