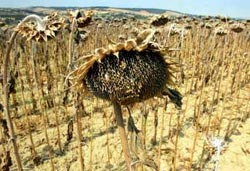 the intense heatwave that baked much of Europe for weeks has convinced many people about the changing climate. "We have not seen such an extended period of dry weather and sunny days since 1870," says Michael Knobelsdorf, a meteorologist at the German Weather Service. "These extremes are happening at short intervals, suggesting climate is unbalanced," he adds.

The heatwave may have eased up now, but the unbearable temperature claimed at least 20,000 lives, fuelled deadly forest fires and caused a severe drought, the European Commission (ec) issued a little noticed bulletin. It stated that the drought has led to drastic changes in the agricultural output; and the variations perfectly match predictions of the effects of global warming.

The report, by ec's Joint Research Centre, reveals that the prolonged heatwave has caused crop yield to drop across southern Europe. For example, maize and sugar beet yield in Italy has decreased by a quarter, and wheat produce has fallen down by a third in Portugal. However, farmers of northern Europe, which was not affected by the drought, did not face a set-back. For instance, the weather increased sugar beet harvest by a quarter in Ireland, and by five per cent in Denmark and Sweden. The shift in productivity is exactly what was forecast in 2002 by Jrgen Olesen of the Danish Institute of Agricultural Sciences, Denmark, and Marco Bindi of the University of Florence, Italy.

The changing weather patterns are also in tandem with the predictions of Britain's Met Office. Its computer models have indicated that record hot temperature (such as that experienced in August 1995), which used to occur once in a century, could happen as often as twice every three years by 2100.

However some scientists assert that one or two extreme weather events do not prove that global warming is the culprit. "People lump extreme events into one basket and use it to strengthen their arguments about climate change," says Simon Brown, a climate change expert at the uk's Hadley Centre.

In July 2003, the World Meteorological Organization (wmo) warned that extreme weather events might increase because of climate change. But Ken Davidson, director of the World Climate Programme of wmo (and a contributor to the statement), now says that media reports about the wmo warning were overblown. "We were very careful to use the word might," he says. "It is even difficult to say that extreme weather events are on the rise because there is no agreed upon definition for the word extreme," asserts Brown. According to Davidson, the picture will become clearer by 2007, when the Intergovernmental Panel on Climate Change compiles its fourth assessment of the likely causes and effects of climate change.

The scenario seems to be already quite clear -- in the summer of 2001, a broad stretch of Mediterranean Europe faced the menace of the worst fires seen in decades, and in 1997, large areas of Poland and Germany were completely flooded. Large parts of central Europe were once again inundated in 2002.

Whatever be the cause, the losses due to climate change would always be mind-blowing, both in terms of life and property. More than 10,000 people have died in France alone. The heatwave has already gouged a multibillion-dollar hole in the continent's economy. Farm lobby groups in the European Union say the drought has resulted in the loss of more than us $5.7 billion. Hardest hit are Italy, France, Germany, Portugal and Austria, where farmers' representatives warn of harvests as much as 60 per cent below the normal for some crops.

The ecosystem has not been spared. For instance, Croatia's major rivers -- the Sava, Drava, Kupa and Danube -- were reported at their lowest levels ever, leading to water shortage. The sweltering temperature also had far reaching consequences for energy provision. Dropping water levels have drastically reduced electricity production at nuclear power plants throughout; the worst hit are the 58 nuclear power stations of France, which cater to 70 per cent of the nation's electricity needs. River water is essential for their cooling process.

However, some have benefited. Grape growers say the heat has killed mold and parasites of the vines, and thickened the skin of the fruit. Its sugar levels have also increased. However, wine making is more of an art than science, and most of the industry is waiting to see the final results.