2,801 bears have been traded dead or alive for their parts and derivatives between 2000 and 2011 in Asia, especially in Cambodia and China, reveals “Brought to Bear”, an analysis of bear seizures across Asia in 12 years 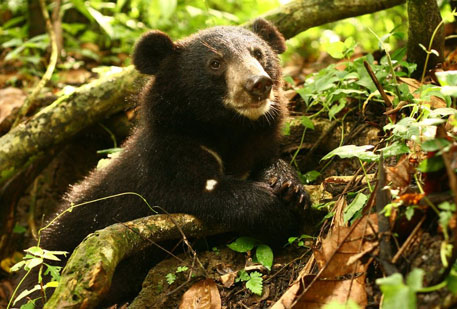 A new report released by TRAFFIC, the wildlife trade monitoring network, raises alarm over the scale of ongoing illegal bear trade in 17 Asian countries and calls for immediate national and international action to curb it.

The findings published in the report, “Brought to Bear: an Analysis of Seizures across Asia (2000–2011)”, reveals the shocking illegal trade of all four endemic species of Asian bears and their parts in the region—Asiatic Black Bear (Ursus Thibetanus); Sun Bear  (Helarctos Malayanus); Sloth Bear (Melursus Ursinus); and Brown Bear (Ursus Arctos).

The report reveals that at least 2,801 bears have been traded dead or alive for their parts and derivatives between 2000 and 2011 in Asia, especially in Cambodia and China.

This report is based on the bear seizures made over a 12-year period in the Asian countries and the Convention on International Trade in Endangered Species of Wild Fauna and Flora or CITES trade database    managed by United Nations Environment Program’s World Conservation Monitoring Center (UNEP-WCMC) on behalf of the CITES Secretariat.

Globally, seventy per cent of the documented bear seizures involved Asian country or territory, thus proving Asian region as a significant player in the international illegal trade of bears. Cambodia led the region with 190 seizures and accounted for 27 per cent of the total number of seizures in Asia over the 12-year period, followed by China with 145 cases and Vietnam with 102 cases. 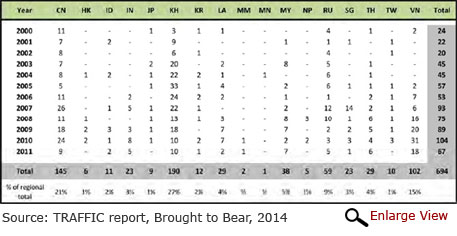 Russia and China alone accounted for 69 per cent of the trade volume mounting to a minimum of 1,934 bears, estimated from the seizure of over 6,000 bear paws. Bear seizures of this scale in Russia and along the border with China suggest a prolific trade in bears and their parts between the two countries.

As there are no breeding facilities in Russia, most of the bear paws seized in Russia and China were along the border points—Heilongjiang Province, Northeast China and Primorsky Krai—and originated from wild bears, says the report. 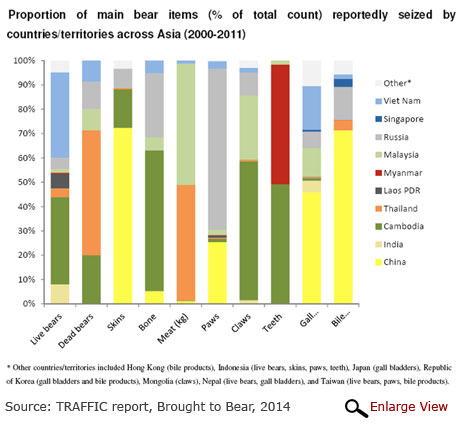 In 2013, TRAFFIC found that maximum number of bear paw seizures were along the Russia-China border. It says that the smuggled bear paws in China are twenty times more expensive than the original price. The trade in bear paws is fuelled by the continued desire in China to use them in ritual dishes and as a "tonic" food (See ‘The Asian trade in bears and bear parts’)

The Traffic report also highlights important cross border trade routes, like Nepal to India, Lao PDR to Vietnam and China, Myanmar to China and Thailand and Vietnam to Japan and Singapore. Traffic has urged governments and enforcement agencies to pay closer attention and keep track of such routes.

The confiscation of live bears accounted for 15 per cent (434 bears) of all seizures, making them the second most commonly seized commodity after paws. Cambodia and Vietnam have been identified as the source countries for live bears.

Although it has been illegal for facilities in Vietnam to acquire new bears for the industry since 2005 and the sale of bear bile is now banned, live bears seized from border provinces in Cambodia, Lao PDR and Thailand were potentially destined for bear bile extraction facilities, commonly referred to as bear farms, says the TRAFFIC report. 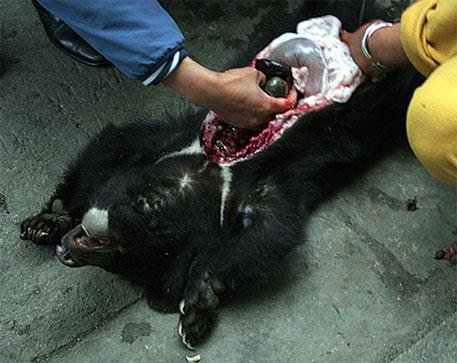 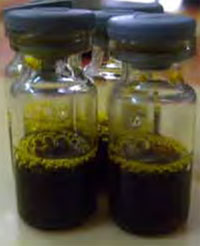 Singapore, Hong Kong, Republic of Korea, Vietnam and Japan have developed and are also able to sustain a well-developed domestic market for gall bladders and bile products. The demand for medicines containing bear bile in Asia is high, driving the trade, and playing a role in the decline of bears in many parts of the Asian region, reminds TRAFFIC through this report once again.

“The number of seizures is a credit to the enforcement agencies, but they undoubtedly only stop a fraction of the overall trafficking because bear products are still widely and easily available across Asia,” says Chris R Shepherd, Regional Director of TRAFFIC in Southeast Asia.

Live bear seizures from India, too

Around 35 and 14 instances of live bears seizures were reported from India and Nepal. These animals were probably meant to be trained as dancing bears. Serious efforts have been made to address this illegal trade; and in India the number of dancing bears has decreased from 400 to approximately 150 since 2005, reveals TRAFFIC research.

We enjoy watching the bear dance, without realizing that the bear is in pain. Watch this video on the plight of India's dancing bears.

The video was first posted in 2009 and later that year the last dancing bear was rescued from the streets of India. 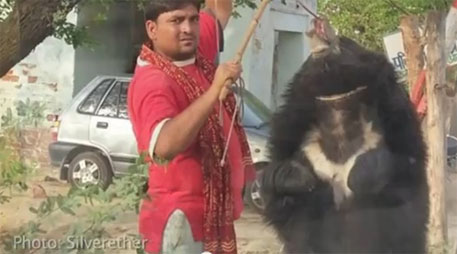 Samad Kottur, a local science teacher, who works to protect and rescue Sloth Bears shared some shocking facts in this video: “They remove claws of the bear. They remove the canine teeth. They put a hot rod into the muzzle. They put a ring in the nose, a brass ring that remains there permanently. Later on they tie a rope to the ring and take away the bear.”

India’s ministry of environment and forests acknowledged the problem and launched the National Bear Conservation and Welfare Action Plan    on November 26, 2012, at the 21st International Conference on Bear Research and Management. The plan summarises the threats faced by bears in India, and outlines management actions to be undertaken by states for the conservation and welfare of the animal.

The coalition of International Animal Rescue in the UK was honoured at this international conference on bear conservation for bringing an end to the dancing bear trade in India. The coalition of International Animal Rescue, Wildlife SOS in India and Free the Bears from Australia successfully ended the dancing bear trade in India in 2009 when Raju, the last dancing bear, was surrendered by his “kalandar” (owner) and brought into the Bannerghatta Bear Rescue Centre near Bangalore. When he  came to this centre on December 18, 2009, Raju weighed just 50 kilos but now he is a 12-year-old bear weighing 110 kilos
(See 'Dancing bears in India: the final curtain')

Role of China in curbing trade

Recognising the efforts of Cambodia’s Wildlife Rapid Rescue Team in addressing illegal bear trade, Shepherd, regional director of TRAFFIC in Southeast Asia, says that strict enforcement of laws at the national level can be a tremendous deterrant and called for replication of such initiatives in other countries to save the remaining bears.

Asian nations, especially China, are held responsible for encouraging wildlife trade and were recently accused of encouraging poaching of African elephants in an important study, which  for the first time quantitatively demonstrated the  scale of illegal killing (See '100,000 killed in 3 years, Africa may have no elephants in a few decades').

According to an Environment News Network  report   on April 30, this year, China has made consumers directly liable for trading in endangered species through a reinterpretation of Chinese law by the Standing Committee of the National People's Congress (NPC). People using or dealing in some 420 rare or endangered species of animals and birds in China could be sentenced to over 10 years in prison, depending on the offence.

In July this year, China also pledged to rescue 500 bears held in cages for their bile as a first step in wiping out the age-old practice as per the ABC news report.

But a lot more is expected from Chinese authorities. The scientific report on African elephants, the two TRAFFIC reports (2011 and 2014) provide enough reasons to Chinese authorities for self- introspection and a strong will to reform wildlife regulations in the country.

The TRAFFIC report recommends that the authorities concerned and parties to CITES should closely examine the latest findings and take appropriate steps to assist countries where required. All parties, in particular bear range and consuming countries and territories, should take action to implement the measures outlined in the CITES resolution on conservation of and trade in bears, says the report.  It also demands development of a centralised database for collating reports of illegal bear trade.

To control the wildlife crime, the report stresses on improved national, regional and international level regional law enforcement. It suggests a national-level dedicated task force modelled on the National Environmental Security Task Force (NEST) developed by INTERPOL. It calls for the closure of bear farms stocked with illegally-sourced wild bears, in accordance with the IUCN World Conservation Congress recommendation.

These efforts coupled with sustained behavioural change programmes targeting consumer demand will be necessary for preventing and eradicating the illegal trade in bears and their parts and derivatives, says TRAFFIC while calling for a renewed commitment from nations to save endangered Asian bears.

Representatives from the eight South Asian countries-- Afghanistan, Bangladesh, Bhutan, India, Maldives, Nepal, Pakistan and Sri Lanka--came together at the second annual meeting of the South Asia Wildlife Enforcement Network (SAWEN), endorsed the SAWEN Statute and updated their collaborative roadmap for the next six years to fight wildlife crimes in South Asia.

The SAWEN Statute, consisting of the vision, goal, objectives and the crucial role that SAWEN will play in combating wildlife crimes in the region, was the most significant outcome of the meeting held at Kathmandu from August 26 to 29. This SAWEN Statute now awaits the final endorsement from governments of the eight South Asian countries.

The environmental crime crisis: threats to sustainable development from illegal exploitation and trade in wildlife and forest resources

The disappearing act: the illicit trade in wildlife in Asia