What led to forest officer’s killing 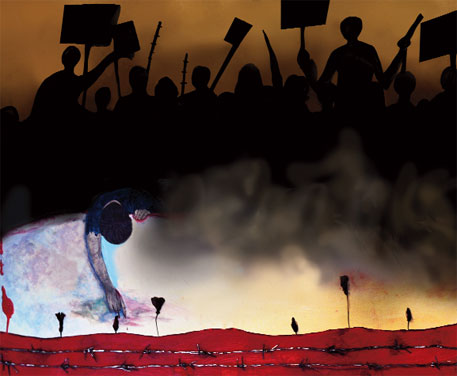 A FOREST range officer was killed on the midnight of September 14 by a group of people in Andhra Pradesh’s Nizamabad district. The officer, R Gangaiah,Ã”Ã‡Ãªand his 11-member team were assaulted with sticks and axes when they tried to stop cultivation at Nallavelli village in Kamareddy forest division. But what made the villagers so furious that they resorted to such an act?

Residents of the village, who mostly belong to backward communities, scheduled castes and scheduled tribes, are quite poor. They have been cultivating land assigned to them by the state revenue department under the government’s land distribution programmes. But despite having title deeds for their land, they have been living under constant fear of forest officials who destroy their crops and file cases against them, accusing them of encroaching forest land.

Who owns the land

According to forest department officials, certain tracts of land assigned to the residents of Nallavelli are reserved under the Andhra Pradesh Forest Act, 1967. But revenue officials have failed to incorporate these forest areas in revenue records, especially in the Prohibitory Order Book, which has the list of land tracts that should not be distributed, says G Nageswara Rao, divisional forest officer (DFO) of Kamareddy division. According to him, the revenue department kept on issuing title deeds in disputed areas.

The charge is denied by K Veena, block revenue officer of Dharpalli. She says most of the title deeds were issued before 1995 and the villagers have been cultivating their land since then. She points out that the forest department raised objections only in 2004.

In revenue records, every title deed has a particular survey number. In Nallavelli, land under two survey numbers is disputed. Of the over 120 ha of land included in survey number 309, the forest department claims ownership to about 25 ha. Similarly, survey number 1570, which has 114 ha of land, includes 7 ha of reserved forests, claims Rao.

On the night of September 14, after being tipped off by the field staff about 50-60 villagers tilling their land, Gangaiah reached the village with his team. Reportedly, attempts of the officials to forcibly prevent the tilling provoked the villagers.

When the officials tried to leave, their vehicle was caught in the mud. “The villagers then surrounded the vehicle and attacked the range officer,” says Rao. Gangaiah, who was seriously injured in the attack, died on the spot, while seven others were hospitalised. Even as the media blamed tribals for the incident, according to Rao, not a single tribal was involved in the attack. The police have registered a murder case and made 16 arrests.

Confrontations between the forest department and the people have become frequent in the past few years. Nallavelli residents have held frequent protests and agitations against the department.

During a meeting of Nizamabad’s district forest committee, convened by the district collector in August last year, it was decided that a joint survey by the revenue department and the forest department would be conducted to solve the problem. “It has not happened because of the revenue department’s lukewarm response,” blames Rao. But Veena says this is not true. She claims she sent three letters to the forest range officer and one to the DFO for fixing a date to conduct the joint survey, but they did not respond.

There are several court cases between the revenue and the forest departments involving thousands of hectares assigned to the landless and poor in the state, points out S Malla Reddy, the state president of All India Kisan Sabha. In many cases, courts have issued orders favouring the revenue department, he says. “Despite having no proper records, the forest department keeps making claims to ownership,” says Reddy, and points out that the gruesome incident would not have happened had the two departments conducted a joint survey to sort out the issue.