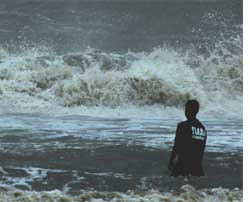 the Arabian Sea, which has warmed by 0.5o C over the past nine decades, is experiencing a shift in its climate. So much so that intense cyclones with wind speed of more than 100 km per hour have become frequent, said a team of marine scientists led by the National Institute of Oceanography (nio), Goa.

The scientists analyzed 37 years of cyclone data of the sea and found the frequency and intensity of cyclones during May and June have increased fivefold between 1995 and 2007, compared to the previous 25 years from 1970 to 1995. Intense cyclones are usually observed in the tropical basins of the Atlantic and Indian oceans.

Usually, when the Arabian Sea heats up in the summer, the upwelling system of the sea driven by summer monsoon wind brings cooler water to replace the warmer water and offsets the rising temperature of the sea surface. But it has failed to do so beyond 1995, the scientists said in the online edition of Marine Environmental Research in June .

To understand the anomaly, the scientists analyzed the CO2 emissions and CO2 concentration in the atmosphere during 1960-2006, and found a strong correlation of the sea surface temperature with the CO2 emissions and concentration after 1995. After 1995, the upwelling-driven cooling was unable to offset the CO2-induced warming of the sea, resulting in its secular warming, they said.

The change is affecting the adjacent western India, with decreased rainfall, progressively warmer winters and consequently resulting in a 16-fold decrease in wheat production after 1995, said the nio team.

Not all agree with the findings. Debashis Lohar of Jadavpur University, Kolkata, said at this rate there would have been a negative production of wheat by now.