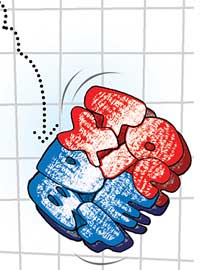 The mortgage crisis in the US has not just precipitated a worldwide economic meltdown. It has also made an impact on the English language. The Macquarie Dictionary, widely regarded as the guardian of Australian English, has named the phrase 'toxic debt' its word of the year for 2008, saying the phrase encapsulates the very essence of the mortgage crisis.

Toxic debt refers to debt which although initially acquired as legitimate business transaction, leads to bankruptcy. The dictionary's editor, Sue Butler, said not only does toxic debt sum up what appears to be the root cause of the global financial crisis, it has a visceral impact.

She said it's a very contemporary use of the word toxic, which developed in the late 1990s in British English. "Last year was full of environmental concerns, but the other big thing that happened was the financial crisis, and that has fuelled coinage of our word of the year," Butler told Reuters.