What's the panic all about? 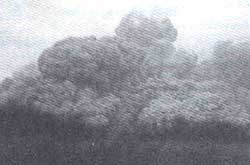 RESEARCHERS working on ozone depletion are being attacked increasingly by critics who say the fears they have aroused concerning ozone depletion due to release of chlorofluorocarbons (CFCs) are all part of a politically motivated sham.

One of the first such attacks was made by a Brazilian meteorologist who pointed out that so much chlorine is being emitted into the stratosphere from sea salt, volcanoes and burning biomass, CFCs couldn't possibly have a noticeable effect on the ozone layer. Recently, the Washington Post front-paged an article that stated with the Montreal Protocol limiting global production of CFCs, "the problem appears to be heading toward a solution before researchers can find any solid evidence that serious harm was or is being done".

The most vocal opponent of those raising ozone-depletion scares is Rush Limbaugh, a conservative, popular talk-show host in the US, who insists that portraying CFCs as ozone-depleting substances is a hoax. Scientists, he contends, are sounding their scare in order to procure funding for their research projects. In just one eruption, says Limbaugh, Mount Pinatubo spewed forth "more than one thousand times the amount of ozone-depleting chemicals ... than all the fluorocarbons manufactured by the wicked, diabolical, and insensitive corporations in history" and even then the effect on the ozone layer was minor. Limbaugh's contentions are supported by the former head of the US atomic energy commission, Dixy Lee Ray, in her book Trashing the Planet.
Harvard atmospheric researcher Jim Anderson discounts such criticism and says those who make it use "apparently responsible scientists who clearly don't understand the problem and have not gone over the data".

Meanwhile, scientists at the US National Oceanic and Atmospheric Administration have found the Arctic haze -- the result of pollution from Europe and Asia that moves north in late winter and early spring -- has declined to about 50 per cent of what it was a decade ago. But they are uncertain of what effect this will have on climate.