Why everyone's critical of import 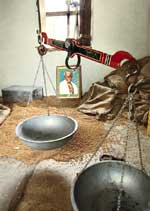 union minister of agriculture Sharad Pawar's declaration that India will be importing wheat is a symptomatic of the gross food mismanagement currently prevalent in India. The decision to import coming after a seven-year production high raises an obvious question what happened to the overflowing granaries of India?

Just three years ago India had a humongous stock of wheat projected at 24.2 million tonnes (mt), today it is a meagre 4.7 mt ( see table: Stock situation). "The current import of wheat is directly linked to lesser procurement by the Food Corporation of India (fci) during 2005. "We procured only 14.7 mt just above the buffer norm of 14.3 mt," says a senior official at the Union ministry of consumer affairs and public distribution on condition of anonymity. But Pawar has a different take.He says the present wheat stock is enough for meeting the needs of public distribution system. Which raises another question:why do we need to import?

When asked why the government couldn't decide on the wheat situation earlier, Pawar makes an interesting point: "The consumption pattern in south India has suddenly changed and there is increased wheat consumption. There may be some truth in Pawar's assumption as the 60 th round report of National Sample Survey Organisation indicates an increase in countrywide per capita consumption levels. Over a 30-day period consumption in rural households has increased from 4.22 kg to 4.25 kg. In urban households the increase is from 4.59 to 4.67 kg.

Political analysts, however, are of the opinion that this decision is aimed at voters in Kerala and Tamil Nadu, where elections are soon to be held. The logic behind this argument is that imports will bring down domestic wheat prices, which are pretty high now.

But this logic still leaves more questions begging for answers. Why has the government decided to import wheat at this time when the global prices are at an all-time high. A tonne of wheat will cost India $190 to $200 including freight charges, says Sanjay Agarwal, a New Delhi-based commodity analyst. Four months ago the prices were in the range of us $120 to us $130 per tonne. India's entry into the global market to procure wheat can increase these prices further. It may be noted here that India exported 19.71 mts of wheat between November 2000 and February 2004, at prices as low as us $80 to us $90. Unfortunately the export price realisation was even lower than the price at which the wheat was offered to people below poverty line. This export was part of the Rs 2,125-crore scam by fci employees, which was unearthed by the Comptroller Auditor General of India.

India's decision to import at this juncture is further questionable because fci bought 8 lakh tonnes of wheat futures in September 2005 for January 2006 delivery on the Chicago Board of Trade. fci sold the same in November for a small profit. If India had stayed with the futures deal it could have saved at least us $60 per tonne today.

The wheat imports this year points to three major problems. Firstly, production has been lower than the forecast by 2 mt; secondly, procurement by fci has also been low; and finally, stockpiling has forced prices to soar. With the opening up of procurement to private sector, food behemoths like Cargill and itc have procured wheat from Punjab, Haryana and Uttar Pradesh. K B Chaudhary of Bharat Krishak Samaj believes that opening wheat procurement to multinationals has pushed market prices up, triggering other problems.

Private procurement has forced almost an 80 per cent price hike in most of India since January. The prices are especially high in Kerala and Karnataka, at Rs 1,100 to Rs 1,200 for 100 kg.

Wheat economist S Nagarajan says the rate of growth in production is also declining -- from 3.57 per cent in the 1980s to 2.11 per cent in 1990s. In this decade it has gone below 1 per cent. This is adding to the problem. Nagarajan says this is a long-term problem because neither acreage nor yield will incresase. Imports are, in other words here to stay.

Costly imports may satisfy the newly developed craze for chapatis in South India but it will hurt farmers in Punjab, Haryana and Uttar Pradesh when procurement begins in April. With a good rabi crop expected in 2005-06 production will rise by 4 mt over last year.