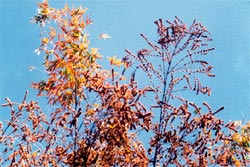 bamboo has recently started flowering in Orissa. For the people of Orissa, already reeling under famine, this signifies further adversity as bamboo flowering heralds a food crisis. Though bamboo flowering is followed by drying up of the entire plant, the Orissa government has not harvested it for the past two years.

The decision of the authorities not to procure bamboo has not only raised concerns about the survival of the plant in the state, but also affected the livelihood of bamboo cutters. The procurement of bamboo was stopped citing decline in its demand in the paper and pulp industries from 2000 to 2001.

At present around 68,000 tonnes of bamboo is rotting in the godowns of Orissa Forest Development Corporation (ofdc). The fall in demand for bamboo in the state is primarily due to a significant technology shift in the paper industry, which has switched over from bamboo to wood for paper production. Tapan Padhi of Regional Centre for Development Corporation (rcdc), a Bhubaneswar based non-governmental organisation dealing with natural resource management alleges: "The state has succumbed to pressure from the paper industry." Binod Kumar, managing director (operations), ofdc, however, claims that the government is planning to prevail upon the paper industry not to use wood for paper production.

Bamboo was nationalised in 1998, which brought it under the direct control of the state government. Experts say that bamboo is on the verge of extinction in Orissa. M Brahmam from the Regional Research Laboratory, Bhubaneswar, feels that bamboo needs to be harvested regularly as it matures in five to six years. After the massive bamboo flowering, the entire clump dies off. Botanist H Y Mohan Ram of the University of Delhi terms this as 'a suicide by over-production'. However, if harvested on time, the bamboo clumps can be saved from perishing. Researchers also pronounce that bamboo flowering is a precursor to famine. The flowering of bamboo produces protein rich seeds. After consuming these seeds, rodents multiply rapidly. They then attack farms and granaries resulting in widespread famine.

In neighbouring Mizoram, the government is taking adequate measures to counter the menace of bamboo flowering, which is set to take place in 2007. The Union government too is formulating a bamboo policy for Mizoram -- the first of its kind in the country (see: Down To Earth, Vol l0, No 6; August 15, 2001).