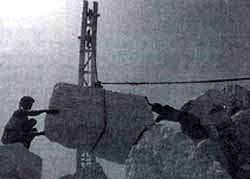 FOR SEVERAL centuries, Udaipur has been renowned for the exquisite use of marble in its magnificent palaces. But it was known only recently that the city rests atop the world's largest marble reserves, and the rush to exploit this bonanza is wreaking havoc on Rajasthan's beautiful lake city.

The 'marble rush' began in 1991 when the Union government, in its zeal to globalise the Indian economy, liberalised marble exports. Marble mining intensified almost immediately in the Udaipur region, where beneath the top soil are vast reserves of marble. Similar reserves also exist in, Banswara and Rajsamand districts. Within a year, the state mines department had licensed more than 6,000 separate mining sites in these districts.

Local conservationists now fear such large-scale mining will permanently impair the delicate ecology of the surrounding Aravali hills. Unchecked dumping of rubble and slurry from mining sites, they say, is compounding the environment problem. But local authorities refuse to restrict mining activity and seem more impressed that even in Rome, blocks of Udaipur marble are being sold as 'Italian'!