When science is fun

Children are more likely to develop the spirit of scientific inquiry when they treat science like a game than when they have to study it. 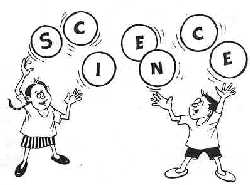 When Subhashim Goswami, a 14-year-old student in Guwahati, faced problems going to school because the roads were waterlogged, he decided to investigate. Goswami found 57 of the 130 storm-water drains in the city were blocked and deforestation in the hills around the city led to rainwater runoff that aggravated the problem. He suggested constructing a good drainage system and proper maintenance of the storm-water drains. Says the student, "These down to earth problems cause as much harm as anything else, but environmentalists talk mainly of big things like the ozone hole."

Students of Maharaja Padmasen Public School in Delhi found a relationship between medical facilities and the prevalence of superstitions. Explains Shweta Kakkar, "The degree of superstition is low in developed colonies, but in areas that have few professional doctors, people take recourse to mantras and ojhas to ward off illness. We also held demonstrations to expose the so-called miracles."

The girls of Matruchaya Kanya Vidyalaya, Bhuj, discovered that jhansu, a plant offered at prayers, is used as a contraceptive in rural areas.

Class nine students of Happy Model High School in Udhampur, found a total lack of irrigation facilities in three villages had led to widespread poverty. Says project participant Shelley Razdan, "We also found out that while the women toil in the fields, the men sit idle and have no secure employment." The students feel cooperative farming and female literacy would improve lifestyles.

Some students collected water samples, tested their suitability for human consumption and studied purification methods employed by the people. "We found out that instead of using potassium permanganate, turtles and fish are put in the water to keep it clean," says Parasanna P Naik of S K K High School in Kiri village, Goa.

For the organisers of the Congress -- National Council for Science and Technology Communication-Network, an organisation of 50 voluntary and governmental associations working under the aegis of the Department of Scientific and Industrial Research, "taking science out of classrooms" to help children acquire more than book knowledge was the purpose behind holding a massive Rs 2-crore exercise that culminated with the congress in Delhi on December 23.

"Science education in India has become calcified," complains Baldev Raj Dawar, an author of science books for children who was invited to judge project presentations. The crux of the problem, according to Network chairperson Narendra K Sehgal, is that "the science taught in schools...does not equip youngsters to develop a scientific attitude to deal with the outside world."

The ball was set rolling months ahead. Network members held training workshops to liaise with resource persons who mobilised students in all 25 states. About 200,000 students between 11-16 years of age took part in the Congress' chosen theme, "Know Your Environment", with participants progressing through district and state-level competitions to reach the national level.

Sehgal says environment was chosen as the focus for the congress because it relates to the real world and the whole methodology of science -- examining facts, collecting data, asking questions, analysing and drawing inferences.

Project presentations were important because "one seeks to achieve more clarity for public presentations and thinks of more answers to possible questions than if it were to be a private exercise," says C M Nautiyal, scientist at the Birbal Sahaney Institute, Lucknow, who participated as a judge. A panel of scientists quizzed project papers delivered to determine students understanding of issues.

The success of the congress has impressed educationists with the need for change and has created the necessary background. Network president Vasant Gowarikar comments, "Network now represents an organised forum which can spearhead this change."