When the vital cables gave way 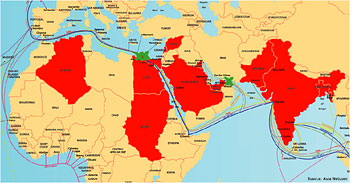 Work has begun to repair three damaged undersea fibre-optic cables that were severed in the Mediterranean Sea and the Persian Gulf on January 30 and February 1. The cause of the cable break is yet to be confirmed and speculations are there that a ship's anchor was to blame.

The breaks in the undersea cables disrupted Internet services across a large swath of the Middle East and South Asia, particularly affecting nations such as India, Bangladesh, Pakistan, Egypt, Qatar, Saudi Arabia, Kuwait, Bahrain and the United Arab Emirates.

India sustained one of the biggest hits, as the damage from its slowdowns and outages rippled to some us and European companies that rely on its lucrative outsourcing industry. Internet Service Providers' Association of India says the country's us $11-billion back-office outsourcing industry, which provides a range of services like insurance claims processing and customer support to overseas clients over the Internet, however, has not been hurt by the cable disruption due to back-up plans.

Reliance communications has been the worst affected as both its cables-- flag and falcon --have been cut. The cuts were on Europe-Asia submarine communications cable, one near Egypt's Alexandria port and the other near Dubai. The Southeast Asia-Middle East-West Europe-4 (smw-4) cable, owned by a consortium of 16 international telecom companies, was also cut during the same accident. The smw-4 submarine cable links Southeast Asia to Europe via the Indian subcontinent and the Middle East. Bharti and the Tata-owned vsnl, which depend on the smw-4 cable were able to minimize the impact by re-routing traffic within a few hours through other cables. "Fixing the cables is a highly-technical job and will take about a week's time to complete," said flag Telecom, one of the firms responsible for the cables, in a February 5 press release. A team of about 50 experts has arrived on the coast of Egypt and work on the data cables are underway, it says.