When the whales took to water 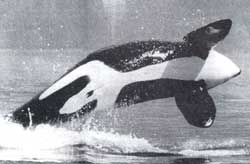 WHAT do whales have in common with pigs, deer and hippos? All of them share the same ancestors, say evolutionary biologists. This belief has been held for a long time, but now, two groups of palaeontologists working in Pakistan have discovered fossils that are up to 52-million-year-old to support the claim. According to Michael J Novacek of the American Museum of Natural History in New York, these new fossils provide "striking evidence" of the whale's "early adaptive experiments in the transition from land to water".

Scientists aver that modern-day whales, dolphins and porpoises evolved from now-extinct, hoofed land mammals called mesonychid condylarths and their transition from a terrestrial habitat to an aquatic one probably involved an amphibious stage.

Until recently, the only indications that some land-inhabiting mesonychid condylarths evolved into the adept swimmers that whales are inferences from an incomplete fossil record. A smattering of evidence of remains from more recent whale ancestors, known as archaeocete whales and now also extinct, helped fill in these gaps in the whale evolutionary record. These creatures had small pelvic girdles and hind limbs, which were used for paddling -- modern whales have only vestiges of these bones embedded deep in their hind muscles.

But the discovery of two fossils in Pakistan -- Ambulocetus natans from the Kala Chitta hills and Rodhocetus kasrani from the Sulaiman range -- is substantial evidence that the whale moved from land to water. According to scientists J G M Thewissen from the Northeastern Ohio Universities College of Medicine, S T Hussain from Howard University in Washington and M Arif from the Geological Survey of Pakistan who dug up A. natans, this creature was probably amphibious -- awkward but mobile on land and adept in water (Science, Vol 263, No 5144).

Though only a partial skeleton of the A. natans has been unearthed, the scientists reckon that it had well-developed fore and hind limbs. These archaic whales, they say, swam by undulating their vertebral column, forcing their feet up and down in a way similar to modern otters. On land, these creatures probably ambled along on their fore limbs and chest, much like modern sea lions.

The R. kasrani disinterred by Philip D Gingerich and colleagues at the University of Michigan and S Mahmood Raza and his colleagues from the Geological Survey of Pakistan, is geologically younger than Ambulocetus and has a more specialised swimming apparatus. The scientists believe that this creature, about 47 million years old, was unable to move on land and could survive only in water (Nature, Vol 368, No 6474).

Rodhocetus was probably distributed widely along the southern margin of Tethys -- the ancient shallow sea that covered large parts of both India and Pakistan and extended up to the Mediterranean.

R. kasrani, Novacek explains, retains characteristics that hark back to its terrestrial ancestors, and it also has features of the adeptly swimming archaeocetes and modern whales. From its land-roaming ancestors, it inherited a pelvis that is joined to the vertebral column. This feature would have allowed its ancestors to support their weight on land. But as distinct from other archaeocetes, the hip vertebrae of Rhodocetus are not fused -- a feature common to modern whales -- making its posterior flexible and allowing it to propel itself by vertical movements of its tail. This, say Gingerich and his colleagues, indicates that the whale's mode of swimming evolved within the first 3 million years of the appearance of the first archaeocetes.