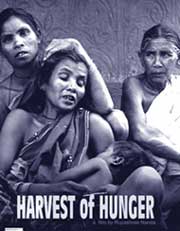 At one point in the film under review, eminent economist Amartya Sen points out, "The first impact of a flood or a drought is not through the food market, but through the labour market." The Nobel laureate's remarks also capture the key message of Harvest of Hunger. Shot over three years, the film follows villagers of drought-ravaged Bolangir district in Orissa as they leave their homes to work as labourers in brick-kilns in Hyderabad.

"We have tried to document one of the worst droughts that hit Bolangir, in the year 2000," says film maker Rupashree Nanda.

The drought is the beginning point of a story of horrific exploitation. Villagers reeling under the calamity turn to labour contractors for loans. Unable to pay off their debts, they are packed off to the brick kilns. "Every year nearly 1.5 lakh people from Bolangir and its neighbouring districts migrate to work in brick-kilns in Andhra Pradesh," says Nanda.

Those who are left behind fare no better as they battle hunger hopelessly and even sell their children to keep starvation at bay -- but they almost always succumb to it. Meanwhile, many high level committees of various kinds visit the dry land of Bolangir to investigate allegations of starvation deaths and child sale, as more and more reports of the malady clog newspaper columns. But such committees only mock at people's sufferings.

The film also takes issue with the food distribution mechanism of the country. Large stocks of foodgrains lie unused while people in Bolangir and in many other parts of the country perish to the ravages of drought.

Change of governments brings little relief. "It's sad to see the game of one-upmanship among politicians and bureaucrats at the expense of poor tribals," says Nanda. The director's comments are interspersed with interviews of villagers. Also interviewed are the kingpins of the labour market and brick-kiln makers. The images are invariably grim: villagers lamenting, cavalcades of officials trundling insouciantly past suffering villagers, the back-breaking work at the brick kilns. "I wanted the film to be stark both in form and content. So, I eschewed all special effects. Reality, after all, is a hundred times starker," says Nanda. And the film manages to be just that: about reality that is as stark as it can get.

The Bolangir migrants work for almost 18 hours a day at the brick kilns, subsisting on a diet of rice gruel. One third of these labourers are children. "The migrant labourers are skilled and they are constrained to work at paltry wages. In this saga of human suffering, both human and constitutional rights are violated, year after year," says Nanda.

When monsoon comes, the migrants return back empty handed to their villages hoping never to have to migrate again. However, despite good rains, they are on their way to the kilns after a few months. "Migration is endemic to the region. I don't see any development here in next 10 years unless a determined political force takes it up as a challenge," says Nanda. She has a point. Crores of rupees have been pumped into the drought-affected districts of Orissa, but nothing actually changes for the poor.

Harvest of Hunger was shot on a budget of Rs 5 lakhs -- quite a meagre amount for a film shot over three years. "My resources dried up, but I did not compromise," says Nanda. "If I could dedicate this film to anyone, it would be to the dignified people of Bolangir. I became one of them," says Nanda. "Some saw me as a sister, some as a friend. They gave me food and shelter. Though vulnerable themselves, they protected me in the brick kilns whenever the seths or the munshis threatened or abused me," she adds.