Where did Homo erectus first appear? 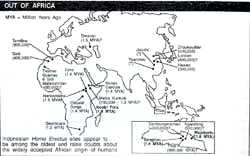 ABOUT 2 million years ago, deep in the tropical jungles of Africa, a humanoid creaked into an upright posture. This was Homo erectus, our most immediate ancestor; it soon learnt to chip stones into useful tools and weapons, such as handaxes. A million years later, armed with these tools, the master hunter left Africa to colonise parts of Asia and Europe.

Most anthropologists would agree with this version of the African origin of humans. And for good reason: the earliest fossils unearthed of Homo erectus, which are dated to about 1.8 million years ago, belong to Africa, while all its Asian cousins are less than a million years old.

The two fossils were unearthed in Java, Indonesia -- one in 1936 and the other in 1970 -- and were first dated to be less than a million years old. Further, in the '70s, the Leakeys, a family of famous fossil-hunters, had dug up in Africa many fossils much older than their Indonesian counterparts. The oldest, a whole specimen disinterred by Richard Leakey at Koobi Fora in Kenya, was 1.8 million years old. So evidence pointed to the idea that H erectus arose in Africa and then wended its way to Asia.

This "out of Africa" theory would have remained unchallenged were it not for Garniss Curtis and Carl Swisher of the Institute of Human Origins in Berkeley. Although Curtis had used potassium-argon in the '60s to date one of the two Indonesian fossils at 1.9 million years, his claim had been greeted with scepticism. The technique was considered unreliable for the fossil site, a region deficient in the potassium necessary to facilitate dating. Now Curtis and Swisher have used the more reliable argon-argon dating method to redate the two Asian fossils.

The new dates indicate that the Indonesian fossils are 1.8-2 million years old and this has given rise to several hypotheses. One is that people were on the exodus out of Africa before they had developed stone implements like handaxes, that were good hunting and butchering tools. Although earlier archaeologists like Louis Leakey had argued that stone tools constituted a technologiocal breakthrough that allowed the African H erectus to extend its range far beyond that of its ancestors, the tools were absent from Asian H erectus sites, no matter what their age. Swisher points out that their absence makes some sense, assuming that some early humans quit Africa before the tools were invented.

Following this assumption logically, what advantage over its ancestors made H erectus a successful explorer? This is fertile ground for speculation. Some believe that the H erectus was endowed with a larger body than its ancestors, which helped it tolerate water loss and store food and water for longer periods. Others, like palaeoanthropologist Milford Wolpoff of the University of Michigan, USA, say that social and dietary changes allowed the early landfarer to carry food over long distances and move through hostile terrain.

A Russian scientist, Yuri A Mochanov has found stone implements in Siberia, and these, he believes, indicate that there were H erectus colonies even in that inhospitable region (see box).


Although the peripatetic H erectus may have travelled the world earlier than previously believed, Swisher says that it eventually died out in Asia. And modern humans -- Homo sapiens -- evolved from H erectus in Africa, he claims, and then colonised the rest of the world. He argues that if the African and Asian H erectus were separated for almost a million years, it is virtually impossible that they both evolved into the same species -- H sapiens.

But a recent analysis of a fossil from China lends support to the rival theory, which claims that modern humans evolved simultaneously in several parts of the world. This was possible because many complex movements allowed interbreeding. The oldest H sapiens skull in China was found in 1984. This, say Chinese archaeologists, indicates that the modern human and its ancestor, H erectus, may have existed side by side.