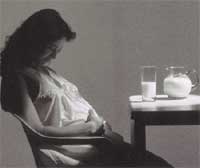 traditional systems of healing have always recognised that one's 'state-of-mind' has a strong bearing on issues of well-being and disease. Modern medicine is now starting to recognise and accept the truth in this. Scientists from different fields of medicine, such as immunology, neurobiology, endocrino-logy, and even psychiatry, are coordinating at the National Institutes of Health, Bethesda, to establish the vital link ( Science , Vol 275, No 5302).

What drove the attention of researchers to this was the observation that pregnancy offers a relief from the symptoms of rheumatoid arthritis. Ronald Wilder and his team at the National Institute of Arthritis and Musculoskeletal and Skin Diseases, usa , say the answer lies in the interaction between the immune system, the nervous system, the hormonal system and significantly, the psyche. Increasing awareness of the extent of physical and molecular links between nerve cells and organs that mediate immune reactions (such as the spleen) is helping us to understand how mental disposition and hormonal levels influence immune reactions.

It is known that infections are first sensed by the immune system. But the reactions responsible for fever and fatigue, that accompany infection, occur only after the 'information' of an infection is conveyed to the brain. Researchers earlier believed that certain factors, including protein molecules produced by white blood cells known as interleukins, are transmitted from the immune system to the brain for a fever to result. But fevers can be induced in laboratory animals with such rapidity as to make physical transmission of the message through molecules fairly unlikely.

It is now known that immune messages are conveyed to the brain electrically. The agent responsible is the vagus nerve, that links the brain to the kidney, liver and other organs. Clusters of nerve cells, known as ganglia, stimulate the vagus nerve by releasing interleukin-1 from nearby immune cells.

The same molecular message does not have to travel all the way to the brain. As the brain can respond to such 'local' stimulation by interleukin-1 - even after the vagus nerve is cut - there have to be other nervous system pathways as well. Similar mechanisms could be involved in the response to stress and inflammation. In laboratory tests, removing a mouse to a new environment can cause an increase in interleukin-6 and lead to 'sickness behaviour'. This makes the mice listless, generally disinterested, and causes loss of appetite.

The brain is not merely a responder to immune signals. It can also modulate the immune response. One instance is provided by the finding that in conditions of stress, the hypothalamus (a part of the brain) causes the adrenal glands to release hormones known as corticosteroids. These enable the individual to deal with the stress. Similarly, by increasing the blood sugar level, it provides for a rapid source of energy useful in dealing with the stress. Also, corticosteroids cause a reduction in the level of interleukin-1, reducing the intensity of the immune response.

The inference drawn is that there is an element of negative feedback in the system. Stress is sensed by the body's defences and conveyed to the brain, which results in lowering the level of defence. Mostly, this leads to an appropriate and stable level of immune response. But there are problems in certain situations. The efficacy of the hepatitis b vaccine is sometimes lowered by stress. The response of influenza vaccine is lower in spouses of persons affected by Alzheimer's disease - the presumption being that the healthy spouse is highly stressed.

This can also explain the link between arthritis and pregnancy. A foetus more than six months-old produces substances that, after getting into the mother's blood stream, increase the corticosteroid activity (oestrogen increases during pregnancy also have the same effect). This leads to a suppression of the wayward immune response that is responsible for rheumatoid arthritis.

On the other hand, a suppressed reaction can increase in the risk of developing auto-immune disease (conditions such as hereditary predisposition to skin allergies and asthma). Psychologists are accumulating evidence that children prone to these are deficient in their hypo-thalamus-adrenal response. Further studies are under way to trace possible links between diseases and mental conditions such as depression and inflammation.