Where there is smoke

Forest fires could have unexpected effects on the world's climate 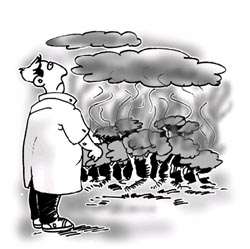 scientists studying the effects of forests fires have, so far, focussed on the cooling that occurs when smoke blocks sunlight. It was reported that smoke particles help in forming water droplets. However, it was not certain how this would affect rainfall. Now Daniel Rosenfeld, an atmospheric scientist at the Hebrew University of Jerusalem, Israel, has shown that smoke from forest fires can, in fact, stop clouds forming raindrops. In other words, smoke tends to prevent rainfall.

Rosenfeld studied simultaneous visual, infrared and radar observations from the National Aeronautics and Space Administration's Tropical Rainfall Measuring Mission ( trmm ) satellite as it passed over Borneo in March 1998, when half the island was covered with smog. He found that dense smoke completely turned off normal tropical rain. The smoke filled the clouds with tiny particles that made water vapour condense.However, the moisture was divided among so many droplets that they were too small to fall as rain. At the same time, smoke-free clouds over the other half of the island produced ample rainfall (New Scientist , Vol 164, No 2208).

Rosenfeld believes forest fires are at least partly responsible for the decline in rainfall in the tropics over the past century. "For certain types of clouds, heavy smoke blocks precipitation altogether," he says, adding that smoky tropical clouds can yield some rain only if they rise high enough for water to freeze.

Experts warn that this may lead to disastrous effects on the world's climate. Similar effects seem to be occurring elsewhere, says Christian Kummerow, a trmm project scientist at Goddard Space Flight Centre near Washington, usa.

Anything that effects the rainfall pattern is important. Besides increasing the risk of droughts or floods, about two-thirds of the energy that powers the planet's weather system depends on the formation and fallout of precipitation, says Hans Graf of the Max Planck Institute for Meteorology in Hamburg, Germany.