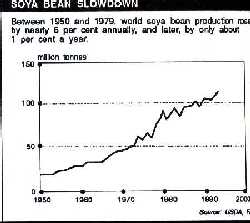 EVIDENCE of protein shortage is accumulating all over the world, according to Vital Signs 1993, a World Watch Institute publication. The disturbing evidence comes from the production trends of the three biggest sources of high-quality protein: fish, soya bean and meat. Oceanic fish catch has remained lower than the record level of 100 million tonnes in 1989, which scientists believe is the maximum yield the oceans can sustain. Also, there is little potential for expanding meat production because grazing lands are already overused.

Food experts say if fish and meat yields are to be increased substantially, captive breeding is the only answer. But captive breeding also means that both fish and livestock have to be fed a diet rich in proteins, such as soya bean. However, because per capita grainland availability is going down, the rising protein use for fodder also severely restricts the access of the world's poor to cheap protein from farmlands.