Whether to boil, steam or fry 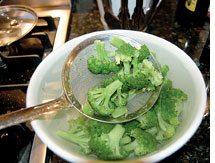 the current dieting fad is that food when eaten raw is healthy. But there is now a study that shows that there are foods that are more nutritious when cooked. Researchers in Italy studied preparation methods of three vegetables--carrot, zucchini and broccoli--and came to the conclusion.

Researchers from the University of Parna and University of Napoli, Italy, studied the impact of boiling, steaming and frying on the chemical compounds--polyphenols, chlorogenic acid, caffeic acid, carotenoids and ascorbic acids--in the vegetables. They found while carrot and zucchini go down well when boiled, broccoli tastes and nourishes best when steamed.

The chemicals, though not considered essential nutrients, are beneficial for human health. Polyphenols, for instance, can significantly reduce the risk of cancer because of its antioxidant and anti-inflammatory properties. Chlorogenic and caffeic acids contribute to the prevention of type 2 diabetes and cardiovascular diseases, and carotenoids and ascorbic acids are known anti-oxidants.

The study indicated that boiling vegetables best preserves anti-oxidant compounds, particularly carotenoid, in all the three vegetables. "Carotenoid compounds significantly increased in boiled and steamed broccoli, compared to raw ones," writes Christina Miglio in the research paper. The paper was published in the Journal of Agriculture and Food Chemistry (Vol 56, No 24). The observations include:

Shikha Sharma, a nutritionist in Delhi, says the study, however, cannot be compared to Indian cooking methods, which go beyond boiling or steaming. Vegetables can still be steamed but pulses need to be cooked properly to break down the protein for digestion. The same goes for fish and meat. Sharma says traditional Indian cooking is quite healthy--less oil and plenty of spices and herbs.

"We saut and then steam vegetables before cooking further and the useful chemical compounds are retained," says Sharma.