Which forests can be felled for oil palm plantations? 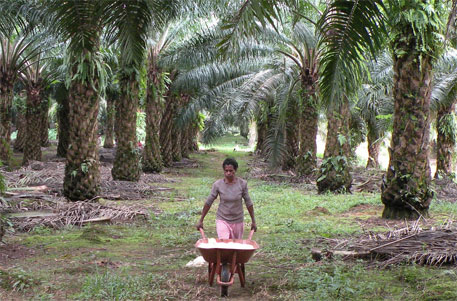 In addition to preserving ecology, undisturbed tropical forests store a significant amount of carbon dioxide—a global warming gas. When these forests are razed, often for setting up oil palm plantations, carbon is released into the atmosphere.

This is the reason oil palm companies, that fell large-scale forests for clearing ground for plantations, are often held responsible for huge amount of carbon emissions. One study shows 50-60 per cent of oil palm expansion between 1990 and 2005 in Malaysia and Indonesia directly replaced forests.

Recently, a rising number of companies that produce palm oil—found in everything, from cereals to cosmetics—have promised not to cut down forests with a high carbon stock (HCS). But no one complies with it as there is no consensus on that magic carbon storage number and what constitutes an HCS forest.

In early August, seven of the world's biggest oil palm growers and traders, including Malaysia's Sime Darby Plantation, Indonesia's Asian Agri and Musim Mas Group and global agribusiness company Cargill, announced that they will fund a year-long study to define what constitutes a high carbon stock forest, provide practical guidance on how to delineate such forests on the ground, and establish thresholds for HCS that take account of regional socio-economic conditions and opportunities. They have also committed to a Sustainable Palm Oil Manifesto.

Not the first look-see
“Allowing clearance in the name of 'sustainability' is nothing less than greenwashing,” Bustar Maitar, head of the Indonesia forest campaign at Greenpeace International. “To show they are serious about addressing deforestation, the group must immediately stop clearing potential HCS forests.” In 2011, Greenpeace, The Forest Trust, a global environmental charity, and palm oil producer Golden Agri-Resources Limited spearheaded a study to understand HCS forest. The study is ongoing.

Several other studies have suggested that 35 tonnes of carbon per hectare (tC/ha) of trees should be considered as the cut-off point for distinguishing forests that should be preserved from degradation. A knowledge exchange network led by the University of York in the UK produced its first science for policy report in May 2014. The report, ‘Change in carbon stocks arising from land-use conversion to oil palm plantations’, notes that only grassland and annual crops on mineral soils contain less carbon than oil palm plantations and conversion of this land will be carbon neutral, or result in a small carbon gain.

Environmental groups allege that the industry does not want to follow the threshold because it will leave them with less land for plantations. 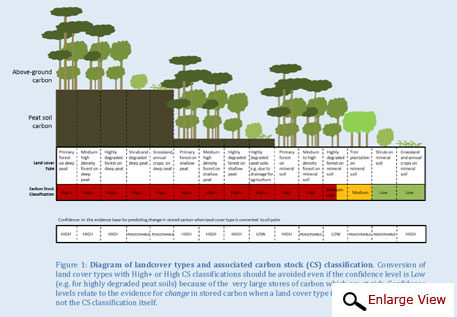