Whiff of scam in Orissa mines 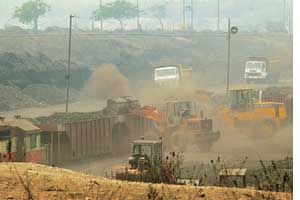 THE Orissa government suspended operations in 128 mines of the state after mining officials detected largescale irregularities in their functioning.

Most of these mines are located in the mineral-rich Keonjhar and Sundergarh districts. The state mines director, Jyoti Ranjan Patnaik, said operations were suspended as the owners failed to produce proof of forest and environment clearances and consent of the state pollution control board (spcb). Mines where operations have been suspended include those operated by big companies, M/s Serajuddin and Co. and Rungta Mines.

The illegal mining was first highlighted by the bjp in July this year. The party gave the instance of manganese ore mining in two mines of Rudukela and Katashi in Keonjhar district without mining lease. The government ordered a vigilance inquiry.The mining department, too, started scrutinising documents of the companies operating in these areas. The scrutiny revealed many mines were operating illegally; there are a total of 596 mines in Orissa.

Vigilance director Anup Patnaik said the agency has so far registered eight cases but declined to comment on the extent of illegal mining. Sources in the vigilance department said some of the mine operators were mining in areas outside their boundaries. Mines department officials said there were instances of companies extracting minerals in excess of what they were permitted without obtaining fresh consent from spcb. Two companies in Keonjhar are said to have extracted excess ore worth Rs 4,000 crore between 2001 and 2007.

spcb member secretary Siddhant Das said his organization does not have a mechanism for ascertaining if a company is extracting excess ore. We have to depend on secondary information like data from the Indian Bureau of Mines but that takes a long time to arrive, said Das. Sources in the government said many mining companies were taking advantage of the clause in the mineral concession rules of 1960 that allows mining operations to continue if the mining lease is not disposed by the government before the expiry of the lease period. There are more than 300 lease renewal applications pending disposal, sources said while adding officials are helping the companies.

The mining director ruled out the possibility of officials colluding with miners. Even in the case of deemed consent, forest and environment clearances are required, Patnaik pointed out while adding lease boundaries would be demarcated afresh. State bjp president Suresh Pujari demanded a cbi probe saying vigilance department was short staffed and cannot handle the scam. What has been revealed so far is just the tip of the iceberg, he said.