While Pakistan angers Arabs for its bustard 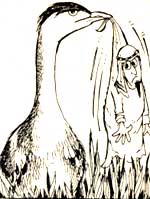 IN Pakistan, environmentalists have gone to court to save the houbara bustard from being hunted by wealthy Arabs. The bustard case has not only angered the Gulf states, it has also provoked a surge of interest in the largely untapped potential of public interest litigation.

When the government of Sind issued a circular allotting certain areas around Thatta district for hunting and training falcons for the years 1991 to 1995 for a high-ranking official in Abu Dhabi, the activists swung into action. A writ petition was filed in the Sind High Court by advocate Kamil Shaikh, on behalf of the Karachi-based Society for Conservation and Protection of Environment (SCOPE), questioning the constitutionality of the discrimination against Pakistanis in favour of the Arab hunters and the "vulnerable" status of the bustard under CITES, the Convention on International Trade in Endangered Species.

SCOPE's petition worked. The high court ordered the circular to be suspended pending further consideration. The battle continues, with the government's pleas to allow hunting order to avert a diplomatic fall-out with the Arabs. Kamil Shaikh believes the bustard has become a symbol of the conservation effort. "Society requires action," says Shaikh, "and these petitions have started to unleash the forces."

SCOPE has also scored a spectacular success in preventing the Kirthar National Park from being sliced in two by a major highway planned to link the towns of the Indus valley from Karachi to Peshawar.

The government refused appeals and alternative proposals from major international organisations. SCOPE challenged the government action in the Sind High Court. Prime Minister Nawaz Sharif intervened and ordered the highway to be rerouted so as not to disturb the park.

Lawyer and prominent environmentalist Parvez Hassan points to other recent cases. In one case, Hassan filed a writ petition on behalf of the Margalla Hills Protection Society to prevent quarrying, stone-crushing and the setting up of a cement plant in the Margalla Hills National Park just outside Islamabad. Bowing to public opinion, the government relocated the quarrying facilities outside the park.

The Pakistan Constitution has not been interpreted, as it has in India, to guarantee to the citizens the right to a decent environment. So establishing the right to bring a petition before the courts (locus standi legal jargon) is the most problematic part of the preparation of these cases, says Hassan. But the people are certainly finding a voice that is making itself heard. Whether the momentum can be built up to bring about a positive change in attitudes and policy-making remains to be seen.