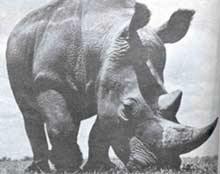 ENVIRONMENTALISTS opposing the Convention of International Trade in Endangered Species (CITES) decision permitting South Africa to trade in live white rhinos did not have to wait long to see their worst fears come true. Hardly a month after the proposal was passed at the November 1994 CITES convention held in Florida, USA, a storm broke out over allegations that figures presented by South Africa to ensure a smooth passage for its proposal were actually overestimates. Another survey on white rhinos which gave a much lower number had been deliberately blackballed, it was accused.

South Africa won the controversial vote permitting them to sell live white rhinos to nature reserves and game parks by stating that they now had 6,300 rhinos. The government said that ground surveys of 1991 showed that the Hluhluwe-Umfolozi Reserve in Natal -- the world's most important white rhino habitat -- had 2,000 rhinos.

But field staff of the Natal Parks Board considered the estimate too high. In September 1994, rhino specialist Peter Hitchens carried out an aerial and ground survey in the Hluhluwe-Umfolozi Reserve. Although the results of Hitchens' ground survey were not available during the convention, the aerial survey had figured only 1,210 rhinos -- almost 800 fewer than claimed. This was not announced at the CITES conference.

George Huges, director, Natal Parks Board, however, told the New Scientist, "As the low count came from an aerial survey without ground checking, it didn't occur to us to either talk about it, or not to talk about it." Aerial surveys, he said, were "notoriously variable". But Hitchens believes his count is accurate to within 100 animals.

Meanwhile, organised syndicates in league with high government officials are systematically wiping out the few remaining rhinos in the neighbouring Zimbabwe.
Zimbabwean officials claim that most of the poachers are Zambian peasants who, having depleted their own stocks, cross the border and carry back rhino horns to be sold to Zambian middlemen. Speaking to The Sunday Telegraph, Parks Department employees and senior conservation society officials have accused civil servants -- even a permanent secretary -- and a senior politician of being involved in the rhino horn scam.

"It's a horror story of negligence, incompetence, and immense corruption, all intertwined to make sure there is no protection there when the poachers arrive," a senior officer of a local conservation society said.

South Africa, the last great reservoir of African rhinos also houses the powerful smuggling headquarters of horns, ivory, drugs, weapons and diamonds cartels. Glenn Tatham, chief warden, Zimbabwe National Parks, told The Sunday Telegraph: "Anyone who believes that a driving force that has killed tens of thousands of rhinos elsewhere in Africa is going to leave South Africa alone has to be very naive and ignorant."

South African intelligence sources link rhino killings to a project in 1975, when Rhodesia's Selous Scouts, supported by South African security forces, poached elephants and rhinos systematically to pay for the war against the British rulers. When Rhodesia became independent Zimbabwe in 1980, South African and Rhodesian fighters cashed in on their poaching, smuggling and marketing skills.

South African park officials believe that the cover provided by government officials could hasten the rhino's extinction. Tony Conway, chief warden at Umfolozi said, "If we can hold off the onslaught, then, some day in the next century we might be able to put rhinos back into Botswana, Zimbabwe, Zambia, Angola, Mozambique and other African countries. If not, it's the end."