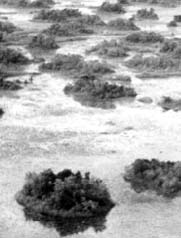 a us government programme that permits landowners to destroy wetlands if they create or restore others is proving to be detrimental for the environment, a panel of scientists has observed. The panel, convened by the National Academy of Sciences, found that the number of wetlands in the us has declined considerably because in many cases the substitute wetlands were not developed. Where they were developed, they not only failed to meet standards, but also lacked the ecological characteristics of the natural wetlands. "The programme's goal of 'no net loss of wetlands' is not being met," the scientists said. They added that this was more evident when the usefulness of these wetlands was considered in terms of controlling floods, providing habitat to wildlife and combating pollution. A memorandum by the us Army Corps of Engineers, which had set the goals for the programme, put compliance as the least priority demanding area, the scientists concede. The memorandum stated that the locations and designs of substitute wetlands were a matter of convenience, rather than ecology.