WHO approves use of meningitis vaccine on infants 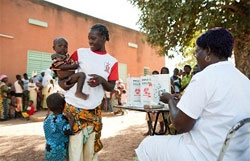 The World Health Organization has allowed the use of meningitis vaccine MenAfriVac on infants in Africa. The vaccine, which is inexpensive and effective, has been in use since 2010 and is manufactured by the Serum Institute of India Ltd. The move would allow the use of the vaccine for routine immunisation of children.

In a news release dated January 9, the World Health Organization (WHO) said, “In the four years since its introduction in Africa, MenAfriVac® has had an immediate and dramatic impact in breaking the cycle of meningitis A epidemics, leading the safe, effective technology to be approved by WHO through its prequalification process for use in infants, and paving the way for protecting millions more children at risk of the deadly disease.”

Meningitis is a major killer in Africa, particularly in the “meningitis belt” of sub-Saharan Africa which stretches from Ethiopia in the east to Senegal in the west.

The vaccine, which costs less than half a dollar, was tailor-made for Africa under the Meningitis Vaccine Project — a partnership formed in 2001 between non-profit PATH and WHO—after the disease killed 25,000 people in its worst ever outbreak in 1996-97.