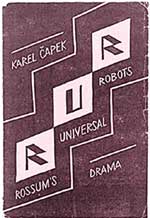 In the spring of 1946, J Presper Eckert and John Mauchly sent out a business plan for a company that would sell "electronic computers". In their eight-page proposal for financing, sent to a handful of prospective backers, the two engineers predicted that the market for such a machine might consist of scientific laboratories, universities and government agencies. Such were the beginnings of the Electronic Control Company of Philadelphia, which produced the Univac, the first computer to be sold commercially in the us . On February 23 this year, the auction house Christie auctioned the original typescript of the Eckert-Mauchly proposal in New York for us $72,000. The typescript was sold as part of a collection called "The Origins of Cyberspace". The collection consisted of about 1,000 books, papers and other artifacts from the history of computing. The items include a manuscript of Karol Kapek's 1921 work Rossum's Universal Robot -- the work introduced the word 'Robot'. The collection belonged to Jeremy M. Norman, a California, usa -based rare-book dealer.