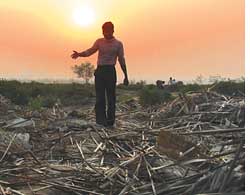 About 1,000 migrants lost their livelihood when their huts and crops on the Yamuna floodplain near the Delhi-Uttar Pradesh border were razed in December. The Uttar Pradesh Irrigation Department carried out the operation on a 25-hectare (ha) patch of the floodplain at Nayabaans village in Noida so that it can transfer the land to Noida for development.

The settlers were from Uttar Pradesh and Bihar. They grew vegetables, flowers, wheat and rice on the land rented from people who once held land lease given by the irrigation department. Pappu of Kaimur district in Bihar had rented about 6 ha at Nayabaans close to the Okhla Bird Park and dnd flyway for Rs 6,000 per hectare for a year. While he farmed, his younger siblings studied in a makeshift school. He lost his month-old vegetable crop and has nowhere to go.

"They just came in the evening and trampled all over the vegetables and flooded the fields. Had they at least given us a notice we would not have sown crops. I had invested Rs 15,000-20,000 on wheat," said Sauraj Singh Kashyap of Hapur in Uttar Pradesh. H C Malhotra, a member of literacy organization Gyan Jyoti Vidyalaya, which set up the makeshift school in the area, said "These people have not made permanent structures on the riverbed. They were merely making a living out of agriculture."

The irrigation department said it had cancelled all leases in 1999 but people continued to possess the land. "About seven people had pattas over this 25 ha. They filed cases in court and the hearing is on," said a department official. "This was not a demolition exercise, so a court order was not needed. We just removed people who had encroached upon the department's land," added the official.

Sohanpal of Dallupura village in Noida does not agree. "The land was given to us in 1948 when the British left, and ever since my family has been cultivating it. My case is being heard in the sub divisional magistrate's court in Dadri," he said.


The Uttar Pradesh Irrigation Department got some land in the National Capital Territory along the Yamuna Pushta road in 1956 for its maintenance. It is now transferring 362 ha of it in Delhi and 32.5 ha in Noida to the New Okhla Industrial Development Authority, also called Noida authority. The places where the land is being transferred are Madanpur Khadar, Sarita Vihar, Jamia Nagar and patches between Chilla Regulator and the Shahdara railway bridge. About 55.5 ha in Madanpur Khadar and 128 ha in Sarita Vihar and Jamia Nagar have been transferred.

The Noida authority said the land is being transferred for development but refused to specify the kind of development. "The irrigation department is unable to do any development there because it does not come under its purview. We will take up development in accordance with the Masterplan of Delhi 2021. I cannot comment on the land in Noida," said Rajpal Kaushik, senior town planner of the authority.

Kaushik also said the Noida authority would request the Delhi Development Authority for change of land use, deepening people's suspicion that it plans commercial development on the floodplain. Under the Delhi masterplan most land near the Yamuna is for greenery and recreation.

An official of the irrigation department said the Noida authority would develop a green belt on the land. "Why can't the department do so? By next year, I am sure there will be construction near the Okhla Bird Park," said Anand Arya, a bird watcher who regularly visits the park.