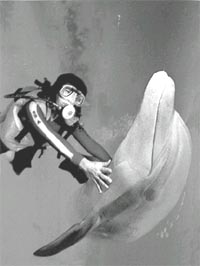 dolphins can recognise their own reflections, say researchers in the us . This shows a level of self-awareness never seen before in the animals and credited only to humans and apes. "This is a very rare ability, which up until now has been seen only in humans and great apes," says Lori Marino, researcher at Emory University in Atlanta, in the us .

Scientists had thought that close genetic links explained the common 'mirror self-recognition' ability in humans and apes. "But now we've shown dolphins recognise themselves in the mirror, we have to contend with the fact that these animals, with very different brains than that of humans, possess the same rare ability. It's a very complex cognitive ability," says Marino.

Marino and Diana Reiss, co-researcher from Columbia University, New York, usa, studied two teenage dolphins. They put a mirror in a small, round pool that was connected to a larger, oval pool by an open gateway. The mirror was positioned just inside the gateway so it could not be seen from the larger pool. The dolphins were called to the side of the larger pool and either marked with a non-toxic magic marker, or rubbed in the same way with an inkless pen. The marks were made on the dolphins' heads, fins and stomachs so they could not see them without looking in the mirror.

Not only did the dolphins make a beeline for the mirror and spend time looking at themselves, they also postured in front of it to try and expose the marked part of the body to the mirror. If they were marked with the inkless pen, the dolphins checked in the mirror for marks, but moved when unable to see any marks.

The dolphins were not trained and no reward was offered to the animals. It was spontaneous behaviour. If an animal recognises itself in a mirror, then, some experts believe, it's capable of other forms of abstract awareness ( Proceedings of the National Academy of Sciences , Vol 98, p 5937).