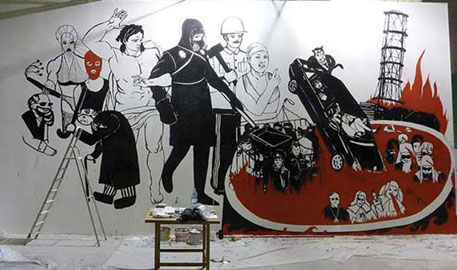 Days before the opening of an exhibit meant to celebrate Ukrainian heritage, director of the Mystetskyi Arsenal art museum, Natalia Zabolotna, destroyed one of the pieces she deemed “immoral”.

News agency RFE/RL reports that the mural by artist Volodymyr Kuznetsov showed a flaming nuclear reactor with priests and judges semisubmerged in a vat of red liquid. A car that appeared to be carrying officials was shown plunging into the vat—likely a reference to the numerous traffic accidents caused by officials in Ukrain. A hodgepodge of other figures were grouped alongside, including what appeared to be the image of Iryna Krashkova. She had accused two police officers of beating and raping her recently. Ukrainian president was due to visit the museum the day after Zabolotna spray-painted over Kuznetsov’s work.

The incident prompted the museum’s deputy to resign, fuelled protests and triggered alarm within the artists’ community. Zabolotna has apologised for destroying the art, but said: “I feel anything said against the homeland is immoral”.

No one has the right to destroy somebody’s work, especially without permission, Kuznetsov told RFE/RL. “Perhaps there is a hierarchy at Arsenal and it is against such a hierarchy—state and religious—that my work is directed.”