Whose satellite is it? 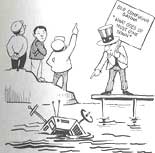 A SATELLITE that plunged into the sea is lying unclaimed and has become a point of debate between USA and China. The US Space Command says the satellite, launched by the Chinese on October 8, fell into the Pacific Ocean 1,600 km west of Peru.

However, China disowns any connection with the fallen projectile. An official of the Chinese National Space Administration retorted, "Can the Americans prove their claims? We will soon prove that our satellite is in orbit." A government spokesperson added, "We can still see it very clearly." Nevertheless, Nelson McCouch of the US Space Command, which claims it can "track a bolt 10 cm in length", said, "We saw it go up and we saw it come down."