Why bother about environment? 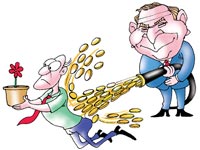 The us administration's proposed budget has raised the hackles of the country's environmentalists. To be sure, a sum of us $30.4 billion -- an increase of about us $1 billion over last year -- has been earmarked for environmental management. But the greens feel that the government is bent on rolling back environmental protection measures, and exposing public lands for exploitation.

The Environmental Protection Agency (epa) has been granted one of the smallest increases for any federal agency -- a mere us $10 million raise over last year. The epa is responsible for protecting the country's air, water and land. Financial assistance for state environmental enforcement efforts has been reduced by us $350 million in the epa's allocation.

The amount allocated for the Clean Water State Revolving Fund has also been cut by about us $362 million. This money had previously been set aside for building and upgrading sewage plants.

The department of interior, which includes the National Park Service and the Bureau of Land Management, manages to fare a little better than the epa. It gets 3.3 per cent more as compared to last year.

The administration's inclusion of projected revenues from oil drilling and leasing in the Arctic National Wildlife Refuge has also angered many critics.