Why demand for Gondwana state continues to be scuttled

Successive governments have been rejecting demand for separate tribal state in central India on the ground that there is no unifying language. Real reason is something else, say Gond leaders

The demand for a separate Gondwana state was raised for the first time in 1956, when the erstwhile Central Provinces and Berar (CP & Berar) state, comprising the tribal belt of Madhya Pradesh (MP), and the whole of Chhattisgarh and Vidarbha, was split up and Vidarbha went to the Bombay state while the rest was merged with the Vindhya and Bhopal states to form Madhya Pradesh. The Bombay state was later split to form Gujarat and Maharashtra states in 1960.

The demand was turned down by the then political establishment. Says Vasudeo Shah Tekam, Maharashtra president of the Gondwana Ganatantra Party (GGP), a political party working for the rights of tribals of central India and the creation of the Gondwana state, “The demand was presented to the then prime minister, Jawaharlal Nehru, by member of Parliament Raja Lalshyam Shah, a scion of one of the Gond royal families. After Nehru turned down the request, Shah resigned.”

Though there is not much clarity among political workers as to exactly why the state of Gondwana was scuttled, observers say that one of the main reasons put forward by the government was the absence of a unifying language to justify the creation of a state. “At that time states were created on the basis of language for administrative ease,” says Tekam, “And we were told there was no standardized Gondi language which could be regarded as the official state language.”

However, political groups take this explanation with a pinch of salt. “If that were true,” says Motiravan Kangali (a retired bank employee and writer) “then the state of Madhya Pradesh does not have a unifying language as well, because different dialects are spoken in different parts of the state. In Chhindwada, Marathi is the prominent language, in Jhabua, Gujarati is spoken while in Bundelkhand, the dialect is heavily influenced by Rajasthani. Hindi, which is the official administrative language of the state, is actually spoken by a very small section of the population.”

The real reason, feels Kangali, is the unwillingness of the mainstream political parties to recognise a separate tribal identity. “Tribal culture is close to nature, it is about living in harmony with nature, which is totally against the concept of development that all governments swear by,” says he. “By splitting the biggest tribal group in the country and dividing it among several different states, each with its own official non-tribal language, governments have ensured that this identity never gains strength and the resources belonging to tribals are open for plunder.”

Over the years, the demand for the Gondwana state has been raised again and again, only to be consistently ignored by successive governments. “Hira Singh Markam, the national president of GGP, has been very vocal about the demand and has been raising it in every forum,” says Hukum Singh Kusre, Madhya Pradesh convenor of the Gondwana Mahasabha, an organisation dedicated to bettering the social and economic lot of Gond and other tribals in central India. “But successive governments have maintained a silence on it. This year, after the swearing in of the new government, P A Sangma, former Lok Sabha speaker, referred to it in his speech, but apart from that it has been a long time since any government person even mentioned Gondwana.”

Markam said that revised maps of the proposed Gondwana state have been sent to the States Reorganisation Commission time and again but the body has not responded at all. 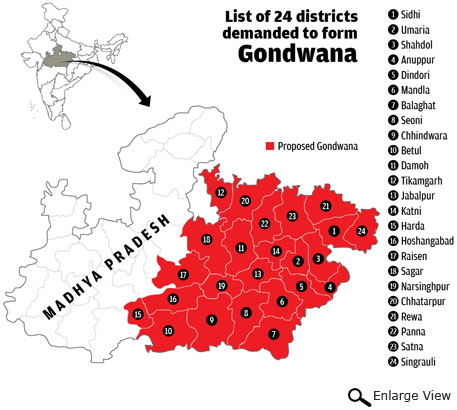 “The main reason behind the prolonged government silence is the fact that the tribal community is impoverished and hence not in a position to mount political pressure,” says Tekam. “The GPP has not been very successful politically because of the same reason. At present, the party does not have any MP or MLA to show. Most tribal political candidates move to mainstream political parties in the hope of gaining electoral success.” He says that once elected on a mainstream party ticket, these people’s representatives distance themselves from the demand and work on the agenda of their respective parties.

Tekam says that creation of Gondwana state is necessary to protect the rights of tribals over natural resources. “Today, the tribal is the main victim of a corporatised development agenda,” says he. “Our people are losing their lands and their forests to mining and development projects.” An exclusively tribal state, he hopes, will help protect the people’s resources from corporate plunder.

Markam says that the first thing on the agenda if a new Gondwana state is created is to give tribals a 50 per cent share in proceeds from mining. “This recommendation of the Bhuria commission never saw the light of day,” says he. “Tribals are being ousted, at best, with market price of land and at worst, through violence, and ownership rights on minerals in their lands remain a distant dream.”

“Governments talk about administrative ease in terms of a common language,” says Kusre. “In the Mahakaushal region of MP, comprising about a dozen tribal-dominated districts, the spoken language of the majority of the population is Gondi. Consider how easy it would be to administer this region if there was a state with Gondi as its official language.” He says that linguistic disconnect between the administration and the bulk of the population has isolated the ruling powers from the aspirations of the people, giving rise to problems like Naxalism.

But would the creation of a Gondwana state necessarily mean power passing into the hands of the tribal people? Kusre is a little sceptical. “One can’t say. You see, Chhattisgarh was created as a tribal state, but the power passed on into the hands of the mainstream political parties, and forced displacement and plunder of resources was, if anything, exacerbated.”

The culprit there, feels Tekam, is again, language. “In Chhattisgarh, the state language remained Hindi (Chhattisgarhi is quite close to Hindi), the language of the ruling classes,” says he. “If the state language is Gondi – the language of the masses, then Gondi-speaking people will be able to actively participate in the political process, and even if they don’t actually get power, people’s involvement with the political process will change the entire picture.”

That is why, he concludes, a Gondwana state with Gondi as its official language is the imperative.