Why do they raid crops? 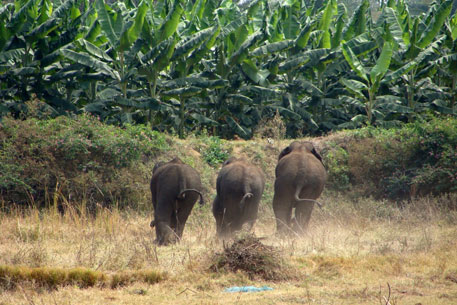 A number of factors drive elephants out of forests and make them raid crops. The usual reasons given are: fragmentation of habitat, degradation of forests, scarcity of food in the natural habitat and disturbance caused by human activities. But sometimes elephants raid crops even when there is a lot of food in the forests, say ecologists.

“Elephants are highly intelligent animals that can make a choice to have food with nutritional content,” says Rama Sukumar, an elephant expert at the Centre For Ecological Sciences (CES) at the Indian Institute of Science in Bengaluru. Through years of breeding of crops, humans have succeeded in maximising the the nutritional contents of crops and minimising toxic contents compared to their wild counterparts, he says. When a nutritious crop is available in the same place year after year, it’s quite natural for elephants to go for it, he says.

Elephants are social animals. They spend about 10 to 15 years in the herds they are born into before going their way. “The knowledge elephants have about their food, their home range, where to find water, how to avoid predators, where they should go in different seasons are not instinctive but imparted by their mothers or other elders in the herd. They learn it socially,” points out Surenda Varma of CES, who has been researching elephants for the past 25 years. If a few members of the herd or the group or the clan, are crop raiders, being social animals, others too may join them.

Elephants which live in human-dominated areas for many years (like those in Alur in Hassan district of Karnataka, a conflict hot spot) would get acclimatised to that habitat and would consider crops as their natural food. They would lose fear for humans and would consider humans as part of their habitat. A lot of their learning is acquired from the immediate vicinity. That could be a reason why two bulls of these groups came back when they were captured and released in Mudumalai a few years back. “We imagine that elephants always consider forests as their natural babitat but it may not be the case always,” says Varma.

There is a lot of behavioural differences in gender, age and group types of elephants that raid crops. Normally, it’s the adult male elephant which raids crops. They take greater risks than a herd with females, sub-adult males and calves, points out Nishant M D, a research scholar with CES, who is studying behavioural pattern of elephants. The bulls may raid large areas while the herd may focus on one area while raiding crops. “That means, when the crop is raided by bulls, the damage would be shared by many farmers, whereas if it’s raided by a herd, the loss will be concentrated in a particular area,” says he. There is a possibility that the males that raid crops could be the weaker ones in the population which yearn to be stronger, he adds.

Understanding of behavioural decisions made by elephants, which is influenced both by their biology and their ecology, would help to resolve important management issues, particularly those related to human-elephant conflict, say scientists. However, detailed assessment of the biological and ecological factors that determine elephants’ decision-making have not been adequately explored, they say.