Why India drifted fast from Gondwanaland? 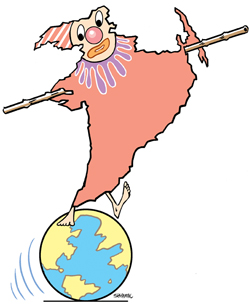 india has thin land roots. That's why it moved about five times faster and further away than other landmasses when it broke apart from its mother supercontinent--Gondwanaland--140 million years ago, according to new research by a team of Indian and German geologists.

When Gondwanaland broke up, its various parts drifted apart with different velocities to form what is today India, Africa, Australia, Antarctica and South America. India moved at a much higher speed than the other parts--around 18-20 cm a year. Australia and Africa, in contrast, moved only at about 2 cm to 4 cm a year; Antarctica remained stationary.

Until now, little was known about what caused the Indian landmass to move so fast. Research by a team of scientists from the GeoForschungsZentrum Potsdam (gfz --Germany's national lab for geosciences) and the National Geophysical Research Institute, Hyderabad, whose findings were published in the October 18 issue of the journal Nature, sheds light on the mystery.

Rapid plate movement
Using a new high-precision seismological method for determining the thickness of the present-day lithospheric (the Earth's crust and upper part of mantle) plates developed at gfz, the researchers found that the Indian plate was about 100 km thick, whereas the other continents measured between 180 km and 300 km.

It is believed that Gondwanaland broke apart because of a plume of intense heat released from the Earth's mantle (the hot, semi-solid 2,900 km deep layer of ferro-magnesium silicates below the crust where most of the Earth's internal heat is located) that heated the subcontinent from below causing it to crack. The plume, they say, may have melted the lower part of the Indian sub-continent's lithospheric roots away but not those of other fragments, thus allowing India to move faster and further than the other parts of Gondwanaland.

"For plate movement the speed is extremely high; in relative terms you can say it moved as fast as the Rajdhani Express," says Prakash Kumar, the lead writer of the paper. "The lithosphere's thickness is the key. The theory has been proposed earlier by other scientists too, but we didn't have the high precision technology to test it," he says. The results provide "strong evidence" that decreasing root depth of lithospheric plates speeds up movement of continents, says Dietmar Mueller, a geologist at the University of Sydney, in a review of the researchers' study.

However, he adds that the mantle plume theory is "contentious" since there's other data suggesting that India split from Australia and Antarctica at least 10 million years prior to any evidence of plume activity. Sujit Dasgupta, director, Geological Survey of India, is also not very excited by the report. The only new thing in the research is the technique to pinpoint the depth of the plates, he says. "The title of the paper is catchy but the real work is only an offshoot of the total body of research being done on seismic activity," he says.

The technology
The thickness of the plates is measured by the shear-wave receiver function technique. It can differentiate between how long seismic waves take to travel through the lithosphere in contrast to through the underlying asthenosphere (a semi-molten layer of the mantle on which the lithosphere floats).

"We calculate the thickness from the difference between the arrival of the two waves," says Rainer Kind of gfz, who co-wrote the Nature article. "However, since these signals are very weak, very good seismic data and sophisticated computer programs are necessary," he says. Kind believes the method could be used to compute where and in what directions landmasses might move in future, but says his team hasn't worked on that yet.