It's unusual for children in Nigeria's rural areas to have any access to private schooling, even if it's of the low-cost variety. They must rely instead on poorly resourced government schools. 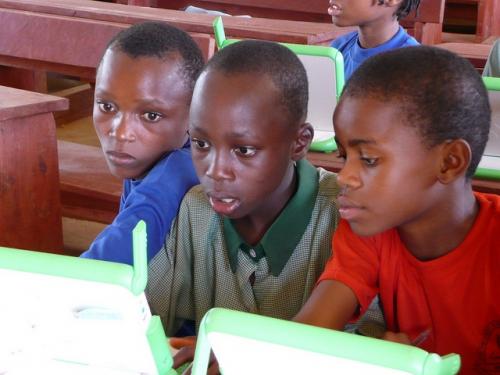 On a walk through the slums of Nigeria’s capital city, Abuja, or its economic heartland, Lagos, you’ll learn something about the country’s education system today: low-cost private schools are everywhere.

They’re small and often occupy ramshackle buildings, but they cater for the vast majority of children in Lagos, and appear to be doing so in Abuja’s slums too. These schools far outnumber government institutions in such settlements. A Lagos or Abuja slum will usually have just one government school compound; not enough to cater for all the children in the catchment area.

This development isn’t unique to Nigeria. Low-fee private schools are on the rise in India, Pakistan, Ghana, Kenya and Uganda. Even when a government provides free universal primary education, many parents will still choose to pay because they believe private schooling gives their children a better chance for learning – or because the government school is just too far to walk to.

Nigerians in cities have some choices about where to school their children. But what about their counterparts in the country’s expansive rural areas? Research I’ve conducted finds that it’s very rare for children in rural areas to have any access to private schooling. Instead they are forced to rely on poor quality, poorly resourced government schools.

Nigeria’s population was estimated at more than 182 million in 2015. Its rural population accounts for just over half.

I conducted a study for the UK Department for International Development’s Education Sector Support Programme in Nigeria while living in Ilorin, the capital of Kwara State. Kwara is one of Nigeria’s poorest and least-known states. It doesn’t enjoy the same prosperity as the south-west yet neither does it struggle with intractable problems such as those of the north-east or the Niger Delta.

With a team of fieldworkers I set out to find out how many private schools had popped up in Ilorin, the state’s largest urban centre, focusing on and reaching every part of Ilorin West Local Government Area. We wanted to contrast this with what we would find in Kwara’s remote rural areas, choosing Baruten in the state’s north-west and Ifelodun in the south-east. To do so, we walked through town to reach the most hidden corners, and drove long distances in the country, exploring all the villages we could find.

The condition of Kwara’s government education system was abysmal at the start of our work in the state. An assessment conducted in 2008, three years before our fieldwork, found that fewer than half of one percentage point of the state’s teachers could pass a test of primary grade 4 level material.

We found 294 low-fee private schools in urban Ilorin. Only a third of these were known to the government’s Ministry of Education.

The situation was very different in the rural areas. We drove for endless kilometres on unbelievably rough roads with no form of public transportation, from remote village to remote village. In Baruten and Ifelodun combined we found about a third of the number we’d located in just one large part of Ilorin.

In most villages people didn’t even know what a private school was. They usually simply directed us to the only village school: that provided by the government.

In the same year, Nigeria carried out a nationally representative household survey with the support of USAID. It found that just 9.3% of all rural children were attending private schools in Kwara State. The figure was 58% for urban children. Starker still: 1.5% of those children who fall in the poorest 40% of Kwara’s population were attending private school. The figure was 80% among the richest 20% of children.

Neither my study’s findings nor those of the representative household survey are surprising. There is simply virtually no market for private schooling in remote rural areas of this Nigerian state.

Why is this the case?

Low-fee private schools are essentially businesses. They need to cover their costs: teachers’ salaries, basic materials and infrastructure, and a salary for the head of the school who is usually also the proprietor. So if there are relatively few children in a village and some are going to government school – which are relatively plentiful in these rural areas – then in most places there are simply too few children to support a private school’s existence. There are often too few children to support the existence of more than one of any type of school.

The second and biggest reason for the lack of growth in Kwara’s private schooling landscape is poverty.

A poor child in Kwara is lucky to go to school at all. The household survey showed that two-thirds of ten- to 16-year-olds in the poorest 40% had never been enrolled in any school. The indications are that fee-paying options are no solution for the very poor. And there is therefore no market logic for private operators.

Where to improve the system

So how can the absence of access to quality education for rural Nigerians be addressed?

The most equitable action would involve fixing government schools – while at the same time leaving existing private schools to just get on with what they are doing. The government needs to concentrate its resources on reaching the poor and remote. Quality simply must be improved to make accessing government schools appear worthwhile.

There are aspects of private school management, staffing and teaching methods that currently failing government systems could usefully adopt.

These include, wherever possible, hiring local people who are part of the community. They’ll have a greater understanding of their neighbours, and be more accountable. They’ll also be used to living in tough rural conditions and won’t miss classes because they’re relying on public transport from elsewhere.

If they are not so knowledgeable, and maybe not qualified teachers (just like existing government teachers), these people can be supported with extensive materials to boost their teaching. The Education Sector Support Programme in Nigeria has already drawn on this approach in its work with government school teachers by developing set lesson plans for all teachers to use. On-paper qualifications should not be everything: many of Kwara’s failing teachers tested in 2008 were formally qualified.