Why Rs 200 crore for Patel statue?

Statue of Unity, projected as the world’s tallest structure, has no environment clearance and will displace tribals 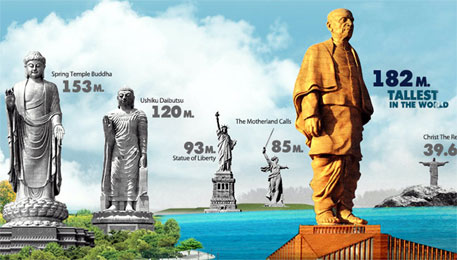 Prime Minister Narendra Modi received flak last year when he, as the chief minister of Gujarat, decided to construct the world’s largest statue in his state. A year later, his new finance minister announced Rs 200 crore for the project that is yet to receive environmental clearances.

The 182-metre-high iron and bronze statue of India’s first deputy prime minister, Sardar Vallabhbhai Patel, once constructed, will be double the height of the Statue of Liberty in the USA and five times taller than Brazilian attraction, Christ the Redeemer in Rio de Janeiro. The foundation stone of the Rs 2,063-crore Statue of Unity project, which will comprise a memorial park and a water body as well, was laid by Modi and senior BJP leader L K Advani on October 31 last year. The project near the Sardar Sarovar Dam on the Narmada is expected to be completed in four years.

“That government of Gujarat has embarked upon the mission to build the largest statue of Sardar Vallabh Bhai Patel. Sardar Patel stands as a symbol of unity of the country. A sum of Rs 200 crores is being set aside to support the Gujarat Government in this initiative,” said Jaitley during his budget speech.

Mahesh Pandya, convenor of Ahmedabad-based nonprofit Paryavaran Mitra, questions the logic of the Centre pumping money in a project with no government clearances. “Why has this wasteful expenditure been made? The project will displace tribals and as a result might not get clearance from the Supreme Court. What will happen to the Rs 200 crore then?” asks Pandya.

Pandya also says that when the project was proposed, it was said that the statue would be built by a trust which would collect donation from each and every individual of Gujarat.

“We are sure that Sardar Patel would have never approved of such a wasteful expenditure. You do not need a statue to highlight either the greatness of an individual or to establish national unity. This must be reconsidered and dropped,” says he.