Why some bumble bees spend the night out 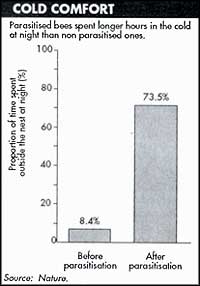 PARASITIC flies that lay eggs in bumble-bees would not be so smug if they knew that the bees have a way of hitting back. Entomologists say parasitised bumble-bees render their abdomens inhospitable to fly larvae development by staying outdoors in the cold all night.

Swiss researchers C B Muller and P Schmid-Hempel studied Bombus terrestris and found parasitised bumble-bee workers desert their colony at night and return only next morning to resume food-hunting.

Insect survival is dependent on temperature and when a larvae becomes a pupa, the host insect dies. The researchers showed experimentally that the bees that stayed out in the cold actually reduced the rate of development of the parasites, thereby prolonging their own lifespan. But among bees remaining in the warm security of their hives, the fly larvae grew bigger and faster. They also found that some of the bees infected by the deadly flies seemed to "know" this and chose cooler climes.

To prove this hypothesis, the scientists observed the behaviour of the bumble-bees and trapped a number of them for more than a month. They found of those bees that spent the night in the hive, only 5 per cent were parasitised. However, 43 per cent of the bees who stayed the night out were parasitised.

The researchers consider such desertion paradoxical because nature has ordained that non-reproductive workers of social insects like bees and ants must stay home and tend to the young. But it would not be a paradox if the seeming deserters are considered instead as cool-headed loyalists that willingly risk a dangerous night in the outdoors to serve the larger interests of their bumble-bee colony.