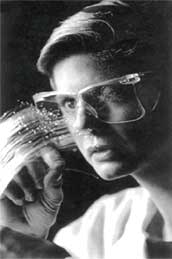 optical fibres can carry ten times the information previously believed to be the theoretical maximum. With the advent of the Internet, the demand for bandwidth (the information carrying capacity of the transferring channel) has increased dramatically. Today, most of the bandwidth in the world is not through copper cables but instead through optical fibers. The latest findings by researchers in the us are revolutionary.

Optical fibers carry information in the form of tiny laser pulses. These are carried in the glass fiber by repeated reflection from the sides of the fiber. This is possible because of the nature of the refracting medium and the geometry of the fiber. These laser pulses are amplified along the way and finally converted into electrical signals at their destination. But the problem with modeling the process of laser light traveling along the fiber is that the medium is non-linear. This means that if two signals are put into the fiber, the end result is not simply a sum of the two signals. The two signals can interfere with each other and hence the total signal is not easy to calculate.

Now, P Mitra and J Stark, researchers at Bell Laboratories, New Jersey, have modeled the fiber by finding a linear model that is equivalent to the non-linear nature of the fiber. This has resulted in their being able to solve the equations and find the theoretical carrying capacity of the glass fiber. They find that the upper limit to the amount of information that a fiber can carry is 150 terabits per second. A terabit is a thousand gigabits. This bandwidth is the equivalent of two billion telephone calls moving through the fiber together! Currently the fastest commercial networks operate at about 1.5 terabits per second. Thus there is much scope for improvement even with the given fiber infrastructure. This should be reassuring to the networking and telecommunication companies who have invested money into laying fiber. Even with streaming video and other such bandwidth intensive applications of the future there should be no bandwidth crunch (Nature , Vol 411, p1027).