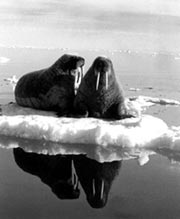 The sun god Iqaluit is displeased, and he is not one hiding his annoyance. Brian Dickson's candid camera captures every tell-tale sign -- knit eyebrows, wrinkled forehead, drooping mouth -- of the amazing stone carving. But of all the exhibits at Dickson's Arctic Wildlife Migrations, Igloolik, Canada 2003 Iqaluit is perhaps the only one blessed with a 'non-sunny' disposition. The rest of them -- the walrus, the polar bear, the Bowhead whale and of course the Eskimos -- clearly seem to make the most of their unique habitat.

This sense of bravado and a keen sense of humour suffuse the photographs of Igloolik, a small settlement at the northern end of Canada's immense Foxe Basin. Bowheads gamboling in the waters, mostly all-tail or all-fin, rarely seen whole; walruses in twos or more, either romancing in the moonlight or scratching each other's backs diligently; the polar bear with its kill, a picture of triumph and the rosy Eskimo boy armed with kettle and cup, making tea. The seascape is no less dramatic in character. For those who envision the arctic as a place swathed in white, the photographs with their riot of colours come as a surprise.