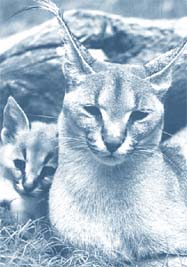 as part of Wildlife Week, Peter Jackson, chairperson of the Cat Specialist Group of the The World Conservation Union (iucn) expressed anguish that in spite of efforts by wildlife officials and conservationists, intense poaching of wild cats continue unabated.

It is believed that only 100 species survive in Iran and Pakistan. The Asiatic lion, which was a common sight in the 18th and 19th centuries, is on the verge of extinction. Jackson also mentioned the decrease in numbers of the black-eared Caracal.

However, the picture is not entirely gloomy. Jackson mentioned that there has been an increase in numbers of certain species of wild cats. The Snow leopard population has increased in the last 20 to 30 years. However, this does not mean that they are free from poachers. "Their coats are of great demand and their bones are used in traditional Chinese medicine," says Jackson. He also mentioned that leo-pards are being spotted in the hilly regions of India quite often. Though decreasing in number in many parts of the world, Jackson says, "they have outnumbered tigers within a century in India."